Signal No. 1 up in 10 areas as TS Ulysses slows down | Inquirer News

Signal No. 1 up in 10 areas as TS Ulysses slows down 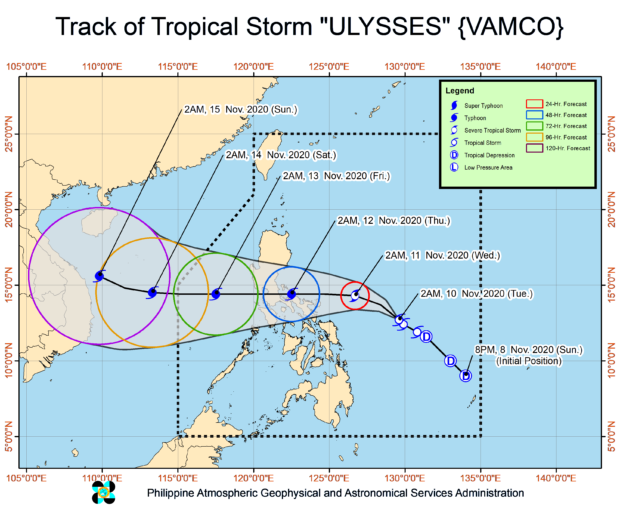 In its 5 a.m. severe weather bulletin, the Philippine Atmospheric, Geophysical and Astronomical Services Administration (Pagasa) said that TCWS No. 1, where winds of 30 to 60 kilometers per hour (kph) may be expected in at least 36 hours, is raised over:

Based on Pagasa’s latest forecast, Ulysses was last spotted at 555 kilometers east of Virac, Catanduanes.

The tropical storm also packed maximum sustained winds of 65 kph near the center, and gustiness of up to 80 kph.

State meteorologists said that Ulysses is forecast to intensify to a severe tropical storm on Tuesday night, and may reach typhoon category by Wednesday morning, as well as reaching its peak capacity of 140 to 155 kph by Wednesday afternoon or Wednesday evening.

Pagasa also said that the tropical storm will move generally northwestward on Tuesday,  then will turn westward on Wednesday.

Ulysses is also more likely to make landfall over Quezon province on Thursday morning, with a close approach over  Catanduanes and Camarines Norte Wednesday afternoon and evening, respectively.

Meanwhile, Pagasa said that apart from Ulysses, the tail-end of a cold front will bring cloudy skies with scattered rain showers and thunderstorms over Luzon provinces, particularly in Ilocos Norte, Apayao, Batanes, Cagayan, Isabela and Aurora.

As for Metro Manila and the rest of the country, residents may expect partly cloudy to cloudy skies with isolated rain showers in these areas due to localized thunderstorms.