Over P20-M worth of illegal drugs seized in Taguig raid

MANILA, Philippines — Police operatives have confiscated more than P20 million worth of illegal drugs and arrested 12 suspects, among them two minors, during a raid in a suspected narcotics den in Taguig City.

A report from the National Capital Region Police Office (NCRPO) on Thursday said the anti-drug operation was conducted on Wednesday afternoon Barangay Ususan and centered on a residence allegedly owned by a certain Patrick Tiñga. Authorities reportedly found illegal substances such as shabu and marijuana being repacked inside the house.

Likewise, the NCRPO said operatives seized from Tiñga’s house at least three kilograms of shabu and 41 grams of marijuana — worth P20.4 million and P50,040, respectively, as well as other pieces of evidence like three pieces of digital weighing scale, two cellular cellphones, and the buy-bust money amounting to P8,000, among others. 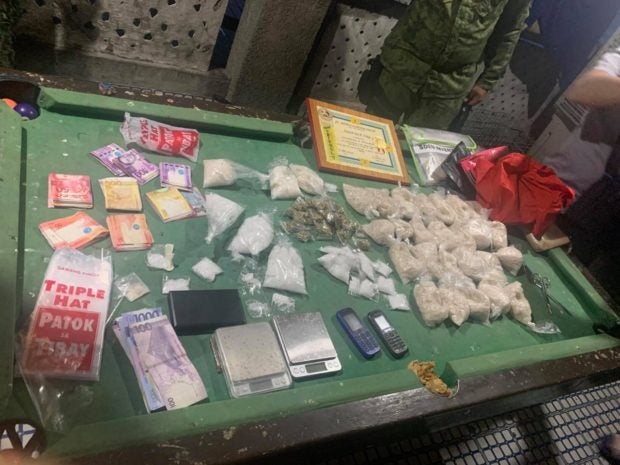 According to the Taguig City Police Station’s Drug Enforcement Unit, the drug sting was launched as a follow-up operation to the arrest of a suspected drug pusher in May, where nine kilograms of shabu were confiscated.

NCRPO said it obtained a “blue book” where information about the alleged drug den’s supposed clients is written.

“In an interview, Tiñga was able to confirm the source of illegal drugs. He named the source who facilitates the drugs as Loloy Fernandez, a detainee in BJMP who was previously arrested with the same violation,” NCRPO said in a statement.

The suspects are now detained at the Taguig City Police Station Custodial Facility, as cases for violating provisions of the Republic Act No. 9165 or the Comprehensive Dangerous Drug Acts of 2002 are being prepared against them.

The two minors, on the other hand, were turned-over to Taguig’s City Social Welfare Development.