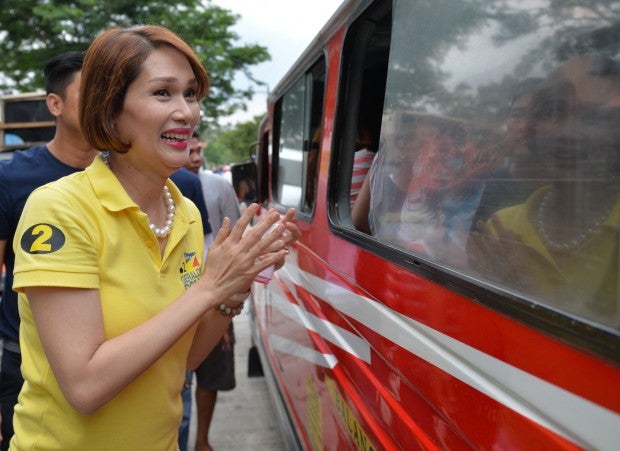 MANILA, Philippines — “You keep on saying that you support us, that you love us. But you do not recognize our rights. What kind of love is that? That’s hypocrisy.”

Bataan 1st Dist. Rep. Geraldine Roman let her feelings out as she defended the Sexual Orientation and Gender Identity and Expression (SOGIE) Equality bill during Wednesday’s heated hearing conducted by the House committee on women and gender equality.

In the hearing, Atty. Lyndon Cana from the Coalition of Concerned Families raised several points as he questioned the proposed legislation that Roman has been vocally supporting.

Roman is the first transgender woman to be elected to the lower legislative body.

Cana first pointed out that some concepts in the bill were subjective.

“Ang nangyayari dito, feelings which are orientation, identity, expression, will be stronger than facts. For example … ‘yung … CR toilet, a man who feels he is a woman, goes to the toilet for women. And ‘yung basis n’ya ng gender identity. There are several women there who are uncomfortable with the presence of a man who feels that he is a woman,” Cana said.

This led Cana to ask if the rights of the heterosexual community were also considered in the bill.

Another issue that Cana raised was that the proposed measure’s penalties and fines  for violators were too high—even saying that these were “very discriminatory… against the straight community.”

“We prayerfully ask this committee to please look at this. There is discrimination here in the text of the bill. So we sense that the LGBT community, while we respect them, while we love them, while we want them to be protected, nagiging super special, elite class siya compared to the rest of the community,” he added.

Cana further raised points in relation to the confusion the measure will supposedly create to the legal system once passed, as he cited the Family Code dealing with grounds for nullity of marriage.

“So ano ngayon ang right ng spouse who believes that male is male and female is female? The SOGIE bill is very loudly silent on the balancing of interests dito,” he added.

But Roman did not hold back in responding to Cana as she addressed the latter’s points one by one.

The lawmaker debunked that concepts in the measure are subjective since there are already laws defining SOGIE—including the Safe Spaces Act.

“At nais ko rin liwanagin that nothing in this bill will stop you from thinking a sinner or that I am an abomination in the eyes of the Lord. But, of course, pagdating po sa karapatang magtrabaho, karapatang mag-aral, tumanggap ng serbisyo mula sa pamahalaan, pumasok sa mga pampublikong lugar o facilities na walang discrimination, ibang usapan na po ‘yan,” Roman said.

Roman likewise responded to Cana’s comment that the penalties proposed by SOGIE bill were too high, as she asked if “dignity” can be priced.

It was at this point when Roman admitted that she was “insulted” by the issues raised by Cana.

“So enough of this hypocrisy. Ako naiinsulto ako sa totoo lang eh. You keep on saying that you support us, that you love us. But you do not recognize our rights. What kind of love is that. That’s hypocrisy,” Roman said.

“Please huwag n’yo na akong sabihan na I love you. Just call me an abomination and a sinner, and just tell me straight up that I deserve to be punished here on earth na papahirapan n’yo buhay ko. Huwag na tayong mag-plastikan,” she added.

Roman then reiterated her earlier pronouncements that the SOGIE bill is not a gender recognition law or a same-sex marriage law.

“This will in no way, suppress your right to religious freedom. So let’s just focus on what it is. It is an anti-discrimination law. And stop saying that these are special privileges. What is so special about the right to study, the right to work?” Roman said.

“My God. Napaka-basic rights ‘yan that all Filipinos should be enjoying, LGBT man o hindi. But the sad fact of the matter is maraming LGBT na pinagkakaitan ng mga karapatan na ito na tinatawag niyong special privileges. My God, enough of saying na we already have enough laws,” she added.

In the 17th Congress, the House approved the SOGIE bill on final reading but the counterpart bill in the Senate only reached the period of interpellation.