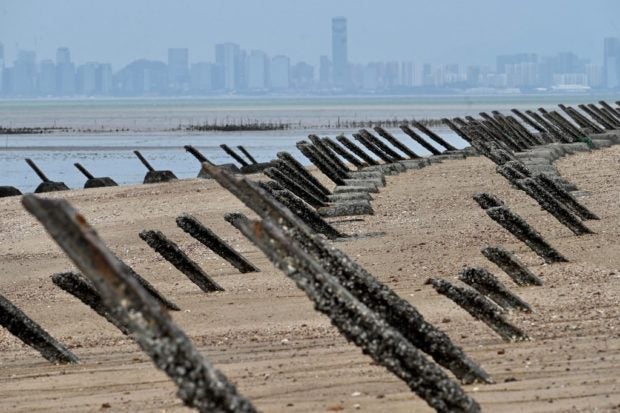 This photo taken on October 20, 2020 shows anti-landing spikes placed along the coast of Taiwan’s Kinmen islands, which lie just 3.2 kms (two miles) from the mainland China coast (in background) in the Taiwan Strait. – The tank traps on the beaches of Kinmen Island are a stark reminder that Taiwan lives under the constant threat of a Chinese invasion — and fears of a conflict breaking out are now at their highest in decades. (Photo by Sam Yeh / AFP)

KINMEN, Taiwan — The tank traps on the beaches of Kinmen Island are a stark reminder that Taiwan lives under the constant threat of a Chinese invasion — and fears of a conflict breaking out are now at their highest in decades.

Democratic Taiwan has learned to live with the warnings of Beijing’s authoritarian leaders that they are ready and willing to seize a place it views as part of its territory.

But that background static has reached hard-to-ignore levels recently with China’s jets now crossing into Taiwan’s defense zone at an unprecedented rate and the People’s Liberation Army releasing propaganda simulating an invasion of the island — and even an attack on US bases in Guam.

Not since the mid-1990s, when China fired missiles into the Taiwan Strait during a moment of heightened tension, has the sabre-rattling been so loud.

Sitting under a pavilion at National Quemoy University on Kinmen, a Taiwan-ruled island just off the Chinese mainland, freshman Wang Jui-sheng says he feels more than a little unsettled.

“China is angry at Taiwan and acting all the more brutish,” he told AFP.

“I’m worried about the chance of military conflicts between the two sides, possibly even in the near future.”

Kinmen (population 140,000) lies just two miles (3.2km) from the mainland and was left in the hands of the Nationalist forces at the end of the Chinese civil war in 1949 that formed modern-day China and Taiwan.

If Beijing’s troops ever cross the Taiwan Strait, they would almost certainly have to take Kinmen first.

And if war does break out, it could easily rope in the United States — pitting two nuclear-armed militaries against each other.

Ian Easton, author of a book about what war could look like, says the world is ignoring the spiralling tensions in the Taiwan Strait at its peril.

“This is the most dangerous, the most unstable, and the most consequential flashpoint on the planet,” the senior director at the Project 2049 Institute, a think-tank that specialises in China-Taiwan affairs, told AFP.

Historically Beijing has used carrots and sticks to seek what it sees as the unification of China, melding honeyed promises of shared prosperity with warnings of annihilation for Taiwan’s 23 million inhabitants.

But in recent years the carrot has all but disappeared.

Four years ago Taiwan voted for President Tsai Ing-wen, who views the island as a sovereign state and not part of “one China.”

China cut off official communication and piled on economic, military and diplomatic pressure, with the aim of prompting voters to place a more Beijing-friendly politician in office next time.

It didn’t work. Tsai won a second term by a landslide in January and polls show a growing number of voters now view themselves as Taiwanese, not Chinese.

The failure to win Taiwanese hearts — exacerbated by Beijing’s crackdowns in Hong Kong and Xinjiang — may explain why President Xi Jinping has adopted the most bellicose stance towards Taiwan since the Mao Zedong era.

Xi, who did away with presidential term limits two years ago, has made no secret of his goals.

He has described Taiwan’s takeover as an “inevitable requirement for the great rejuvenation of the Chinese people” — a project he aims to complete by 2049, the centennial of communist China’s founding.

During a trip last month to a PLA base, he told troops to “prepare for war”.

Captain James Fanell, former director of naval intelligence for the US Pacific fleet, believes China will move on Taiwan in some form in the next 10 years.

“The reality is China’s always had a plan and they’re on a timeline,” he told AFP from the Geneva Centre for Security Policy which he joined after his retirement in 2015.

“We’re in the decade of concern right now.”

During his career, Fanell watched China transform from a brown-water force confined to its coast into a globally capable navy equipped with better hypersonic missiles and far more ships than the US.

“For every one ship we produce, they produce five times as many,” Fanell said.

He added that what makes Beijing’s designs on Taiwan so dangerous now, compared with previous moments of tension, is that China may now have enough military might to take the island — although any invasion would be hugely costly.

Will US stand by Taiwan?

Whether the US will come to Taiwan’s aid in the event of an attack is still not clear. Unlike Japan, South Korea and the Philippines, Taiwan is not a treaty ally.

But Washington is bound by Congress to sell Taiwan weapons to defend itself, and says it opposes any forceful change of the island’s status.

The policy — dubbed “strategic ambiguity” — was designed to ward off an invasion without directly confronting China.

But there is growing bipartisan discussion in the US over whether a switch to strategic clarity is now needed given China’s more assertive approach.

“If Taiwan was conquered and occupied by the PRC (China), America’s alliance system in Asia would be devastated,” said Easton.

The administration of US President Donald Trump has certainly embraced Taiwan as it clashed with Beijing on a host of issues.

Trump has been much more willing than his recent predecessors to sell major weapon systems to Taiwan’s out-gunned forces.

Over the last three years, the US has agreed to deals worth at least $15 billion, including new generation F16 fighter jets and moveable missile platforms.

Whether Trump’s challenger, Joe Biden, will take a similar stance on Taiwan if he wins the election is unclear.

As the great powers jostle, those living in Kinmen desperately hope such weapons will never be needed.

“I don’t want to see a war break out as both sides would suffer,” said Tsai Yan-mei, a Chinese mainlander who married a Taiwanese man and lives in Kinmen.

“I hope to live a stable life,” she added. “I enjoy the democracy and freedom in Taiwan.”