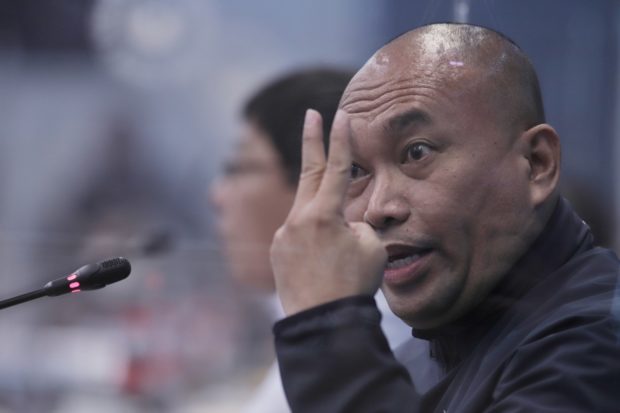 Jeffrey Celiz, who claims to be a former member of the New People’s Army (NPA), appears before a Senate red-tagging hearing on Tuesday, Nov. 3, 2020. (Photo by JOSEPH VIDAL / Senate Public Relations and Information Bureau)

MANILA, Philippines — The Communist Party of the Philippines has been receiving cuts from the contractors of infrastructure projects, Jeffrey Celiz, who claims to be a former communist rebel, said on Tuesday in a Senate red-tagging investigation.

“If there is one single biggest mafia-style, highly organized, most prolific extortion machinery to come before the face of the earth, it’s the CPP-NPA-NDF,” Celiz said, referring to the Communist Party of the Philippines, the New People’s Army, and the National Democratic Front.

“The government has not been able to stop that,” he added.

The CPP, he said, was able to get information about projects — their locations, costs, and project managers — from the Department of Public Works and Highways itself.

Celiz also claimed that the CPP could “make” the two largest telecommunication companies in the country pay them a combined P200 million “every year.”

Sen. Panfilo Lacson, who led the hearing as chair of the Senate defense panel, said Celiz’s claims — both on the telcos and the infrastructure projects —  were an “open secret.”

According to Lacson, the NPA takes a 2-percent cut on infrastructure projects.

“Nothing moves, especially in their areas of influence, without the 2 percent from the contractor,” he said.

“That’s in addition to the percentage of some congressmen,” Lacson added.

The communist groups, Celiz said, were able to “circumvent’ the Anti-Money Laundering Council by establishing a “network of conduit NGOs.”

These NGOs, he said, “channel funds” amounting to P300 million to P400 million from “partners” in European countries, such as Belgium and the Netherlands.

Lacson instructed Celiz to submit to the Senate committee lists of NGOs supposedly acting as conduits for the CPP.

During the hearing, Celiz also tagged former Bayan Muna Rep. Teddy Casiño as being part of the CPP.

Celiz said he was a communist rebel during the time that Casiño was the national president of the College Editors Guild of the Philippines (CEGP).

“I was the regional chairman [of the CEGP] — though I know him also to be part of the CPP,” Celiz said.

“I’m not going to be a hypocrite,” he added, speaking partly in Filipino. “We were all CPP. They are still part of the Communist Party, and worse, they deny it. They are not admitting to the nation,” he added.

“I was the national president of the CEGP from 1991-1994 when Celiz was active in our Iloilo chapter. My God, that was 29 years ago during our student days! I cannot see how on this basis he can drag my name into his web of lies,” Casiño said.

“Celiz presents no proof or evidence of the accusations he makes against me, other than his and his military handlers’ belief that because I am a prominent activist, then I must also be a  high ranking leader of the CPP-NPA-NDF,” he added.

In that list, Celiz was identified in the list as a member of the House of Representatives, which he never was, according to several reports that came out earlier.

“I was included in that list because it was part of the government project to go out and dismantle the drug syndicates in Iloilo City,” Celiz told senators. “I used that cover because I am working in many instances in covert operations.”

From ‘maginoo’ to ‘mandurugas’: How contractors describe officials asking for kickbacks