Scorned by Trump, many Nigerians love him all the same | Inquirer News

Scorned by Trump, many Nigerians love him all the same

The rally, after all, was in Onitsha, a city in eastern Nigeria.

Trump has disparaged African nations, calling them “shithole countries” and saying Africans would never leave the United States if allowed in. This year, he added Nigeria and five other countries when he expanded visa curbs.

But millions in Africa’s most populous nation love the bombastic 45th U.S. president all the same. 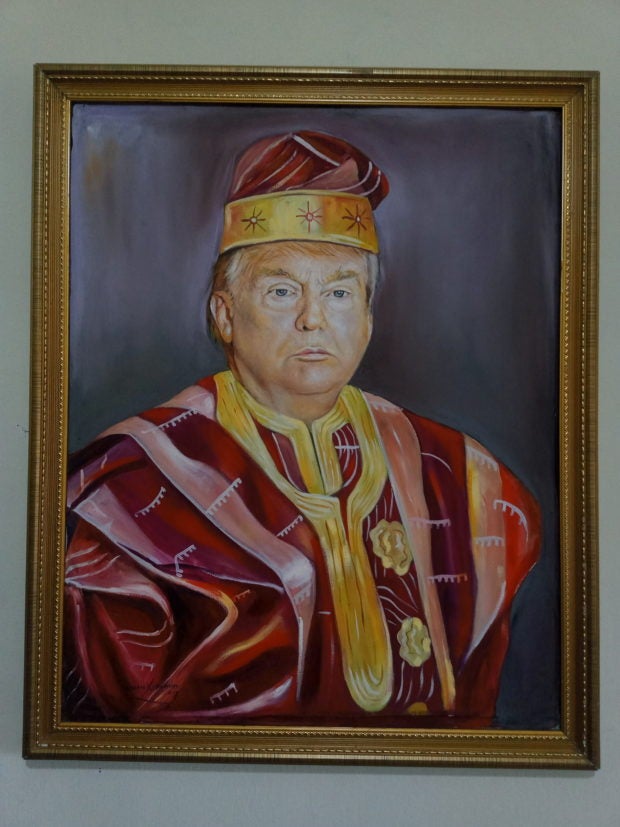 A painted portrait of U.S. President Donald Trump wearing a gold-trimmed red agbada, a traditional flowing robe worn by Yoruba men in southern Nigeria, hangs in an upscale restaurant in Lagos, Nigeria October 18, 2020, in this handout picture obtained by Reuters on November 2, 2020. Peter Udoakang/Handout via REUTERS

“President Trump, may we shout for joy over your victory,” Rev. Daddy Hezekiah of the Living Christ Mission Inc., which organized the Oct. 25 rally, said in a video.

A Pew Research Center poll in January found that 58% of Nigerians had confidence in Trump, behind only Israel, the Philippines, and Kenya. A 2020 Gallup poll showed 56% of Nigerians approved of U.S. leadership, versus 24% for Europeans.

In a posh Lagos eatery, a portrait of Trump in a gold-trimmed red agbada, a flowing robe worn by Yoruba men, hangs on the wall. The traditional clothing is a “mark of respect,” said artist Peter Udoakang.

“I made this painting to bring him closer to us,” said the 23-year-old, adding that Trump’s “radical” approach to governing appealed to Nigerians, who are used to hustling in a tough economy to survive.

On a busy Lagos road, driver Michael Onyeonoro said if Nigeria found a similar leader, the U.S. visa troubles might not matter.

“If we have a person like Trump…Nigeria will be a better place to stay,” Onyeonoro said. “There will be no need of going outside the country.”