MANILA, Philippines — Malacañang on Tuesday defended President Rodrigo Duterte after he was seen without his face mask on while conferring with residents of Guinobatan, Albay, one of the areas badly-hit by super typhoon Rolly.

Presidential spokesperson Harry Roque said that the president merely wanted to show that the government is ready to assist Albay folk affected by the typhoon, even if it meant exposing himself to the threat of COVID-19.

Pictures of Duterte without his face mask on were provided by the Office of Sen. Christopher “Bong” Go, longtime aide of the President who accompanied him during an aerial survey of the Bicol region. 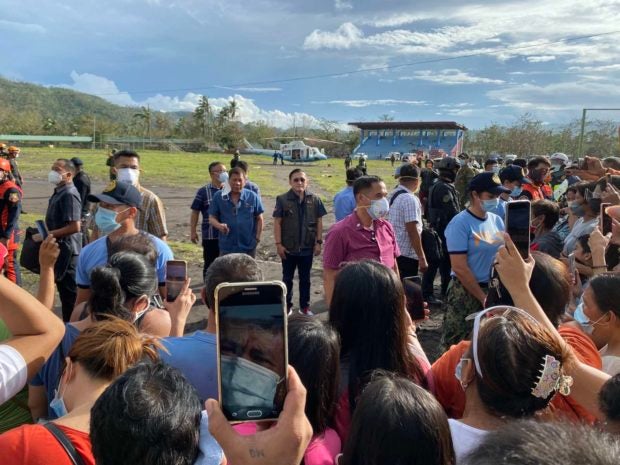 Another picture of the President without his face mask on from the Office of Sen. Bong Go.

After the aerial inspection, Duterte appeared before residents of Guinobatan, Albay where he was seen with his face mask removed and dangling from one ear.

Wearing of face masks is one of the government’s key health protocols to prevent the spread of coronavirus.

(I’m not sure if that was intentional or it was accidentally removed. But what is important is that the President went to Guinobatan which was among the areas badly hit by Typhoon Rolly.)

(Even if his mask was removed, the danger is at the President but he cannot bear not to see Bicolanos, he went there and exposed himself to the threat of COVID-19. Nonetheless, he is the President and he wanted to show the government is there to assist them.)

Asked about the President’s health, Roque gave assurance that Duterte was as well as “anyone of his age.”

Duterte’s absence in the Sunday briefing of key government officials on Typhoon Rolly was questioned by many, prompting the hashtag #NasaanAngPangulo to top trending topics on Twitter.