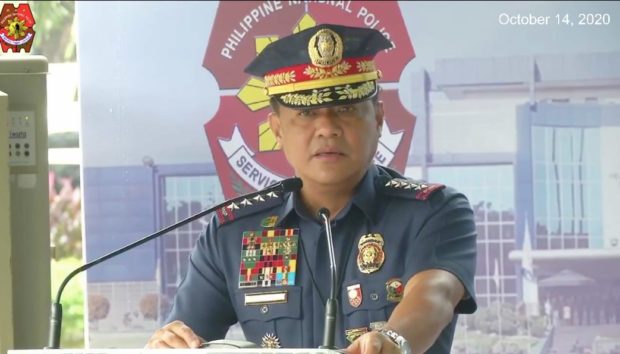 PNP chief Gen. Camilo Cascolan on Monday said that aside from the Central Visayas police to be deployed in Bicol Region, members of the Reactionary Standby Support Force (RSSF) of the PNP are also on standby at Camp Crame for possible augmentation in areas affected by Rolly, which earlier reached the super typhoon category and was declared the world’s strongest storm so far for this year.

(The RSSF will just remain here. The Region 7 police has been instructed to proceed to the Bicol region and extend due assistance.)

“For the meantime, let’s have Region 7 go there, assist them, give food,” he added.

Brig. Gen. Albert Ignacius Ferro, Central Visayas police chief, in a text message to INQUIRER.net, said he is preparing 100 police officers to be deployed to the Bicol region “hopefully tomorrow.”

Cascolan said other PNP officials have likewise made rounds an assessed the situation in the Mimaropa (Mindoro, Marinduque, Romblon, Palawan) region, Bicol region, and Metro Manila.

The PNP is coordinating with the Department of Social Welfare and Development and the Armed Forces of the Philippines regarding the security of DSWD and other relief operations personnel  and other related initiatives.

Police officers living in areas earlier forecast to be affected by Rolly were earlier allowed to go back in their provinces, according to the PNP chief.