Only Signal No. 1 raised over several areas as Rolly continues to weaken 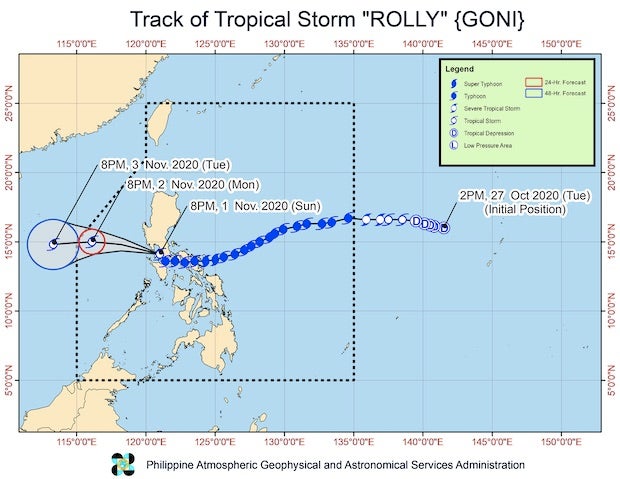 MANILA, Philippines — Even as Tropical Storm Rolly continued to weaken over the West Philippine Sea, several areas in the country remained early on Monday under Tropical Cyclone Wind Signal No. 1 — including Metro Manila.

Rolly was located 100 km west southwest of Subic Bay, according to the 5 a.m. bulletin of the Philippine Atmospheric, Geophysical, and Astronomical Services Administration (Pagasa).

It had maximum sustained winds of 65 kph near the center with a gustiness reaching up to 80 kph as it moved west-northwest at 20 kph.

Rolly is expected to exit the Philippine area of responsibility (PAR) on Tuesday morning.

Meanwhile, Pagasa warned against rough to very rough seas, with waves from 2.5 to 5.0 meters, over the seaboards of Northern Luzon and Central Luzon, the western seaboards of Batangas, Occidental Mindoro including Burias Island, and Calamian Islands, and eastern seaboards of Quezon including Polillo Islands and Bicol Region.