‘Nowhere to go, nothing to cook’ in typhoon-stricken Albay village 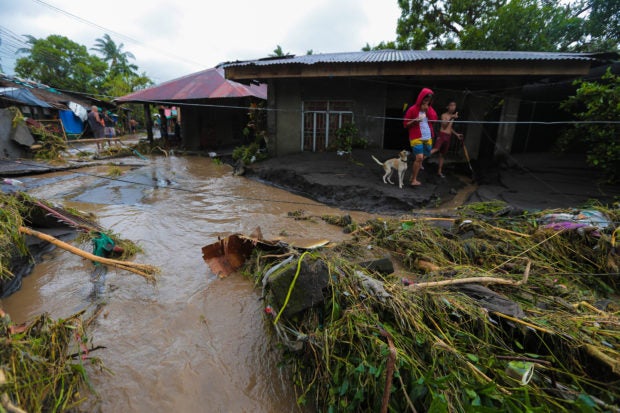 CLOSE TO HOME Residents pick up the pieces after mud, boulders and other typhoon debris laid their homes to waste in Camalig town, Albay province. —MARK ALVIC ESPLANA

GUINOBATAN, Albay, Philippines — Wenifredo Alcantara Sr. does not know how to get back on his feet after his family lost everything to Typhoon Rolly (international name: Goni) early on Sunday.

Alcantara, a resident of Travesia village in this town, was in his home when volcanic mud and boulders came down in an avalanche from Mt. Mayon and swamped Zone 4, where he lived, at 7 a.m.

“Our village captain allowed one person to stay home,” he told the Inquirer to explain why he was alone when the catastrophe struck. “I was looking out for our belongings and pets. I was not expecting the lahar to flow the way it did.”

It is a common practice in Bicol for at least one member of the family, usually the father, to stay behind during evacuations to keep watch over belongings that they cannot bring to evacuation centers.

Alcantara’s wife and three children were sheltered at Travesia Elementary School, where they shared a room with two other families.

Due to the COVID-19 pandemic, he said health measures were put in place despite multiple families sharing one classroom.

He said “Rolly” was as strong as last year’s Typhoon “Tisoy” (Kammuri) and 2006’s deadly Typhoon “Reming” (Durian), but he had believed his family could recover from the damage it would cause to their home, as they always did in the past. This time, however, he said, the volcanic mud and the giant rocks made getting up difficult.

The boulders crashed with thunder-like noise that could be heard up to 3 kilometers from Travesia, he said.

“We don’t know how to get back up after this because of the trauma from the experience. Our house is still under mud,” Alcantara said.

He and his family saved nothing but the clothes on their backs as Rolly swept through their village.

“We will stay in the village hall tonight. We have nowhere to go and nothing to cook,” Alcantara said.

According to Guinobatan Mayor Gemma Ongjoco, around 180 houses in Barangay Travesia were buried in volcanic mud.

Two people in the town drowned, one of them a 5-year-old child.

“We feel very sorry that we didn’t attain the zero casualty goal. We exerted all our efforts to save them but the lahar flow was unexpected,” Ongjoco said.

—With a report from Michael Jaucian