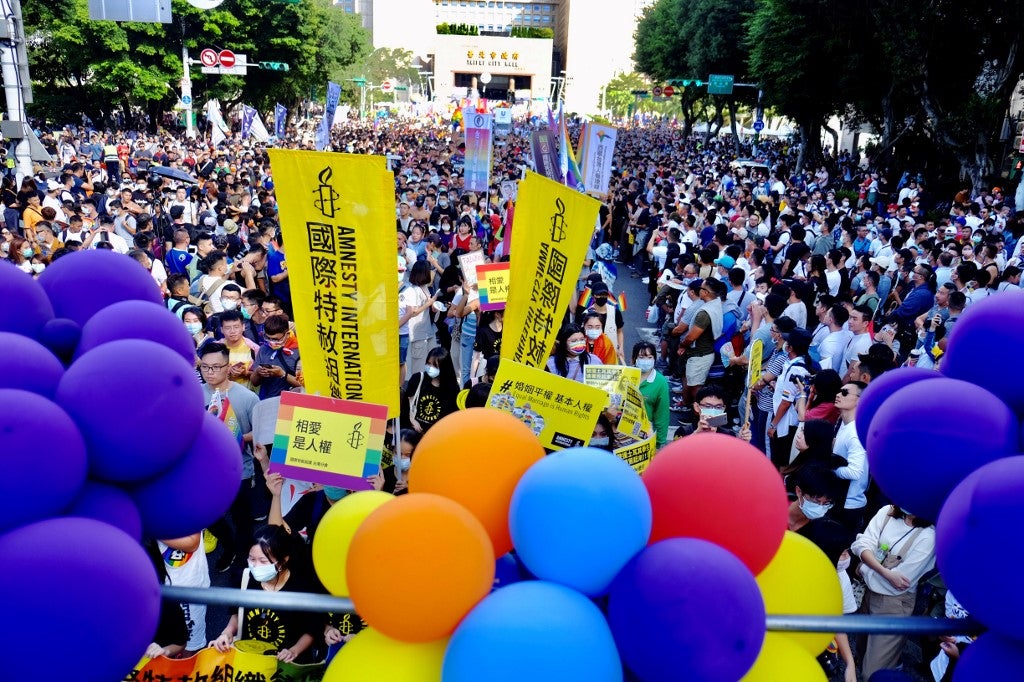 LGBT rights activists march on the street during the annual Gay Pride Parade in Taipei on October 31, 2020. (Photo by Sam Yeh / AFP)

Tens of thousands of revelers joined a gay pride rally through the streets of Taiwan’s capital on Saturday in a colorful celebration of equality made possible by the island’s successful vanquishing of the coronavirus.

Taiwan is at the vanguard of the burgeoning gay rights movement in Asia and became the first place in the region to allow same-sex marriage in May 2019 after a bruising political fight.

It has also achieved remarkable success against the coronavirus, recording more than 200 days in a row without a single local infection.

As a result there are few of the social distancing measures currently in place across much of the globe, allowing crowds to gather on the island.

Rainbow-colored flags and balloons were carried through Taipei under blue skies on Saturday afternoon.

“Gay marriage is now in its second year,” Wu told AFP. “I was hoping to be able to attend all of my friends’ wedding banquets and that’s why I am dressed like a wedding banquet.”

Saturday’s parade came a day after two same-sex couples joined a mass wedding hosted by the military for the first time in another gay rights landmark in Asia.

Over 4,000 gay couples have registered their marriages since the law change took effect last year when Taiwan became the first place in the region to allow same-sex nuptials.

Taiwanese LGBT groups held a smaller pride march in June — the traditional pride month — in solidarity with gay communities around the world who were unable to celebrate because of the COVID-19 pandemic.

Organizers estimated a turnout of 130,000 on Saturday — the 18th Pride march in Taipei — down from last year’s record 200,000 participants when many international visitors were still able to travel to the island.

Taiwan is home to a thriving LGBT community and its capital is due to host Asia’s Gay Games next year.

But the issue has caused deep divisions on the island, especially among conservative religious groups and older generations.

President Tsai Ing-wen took a considerable risk in pushing for gay marriage. But she won a second term in January with a landslide.

Currently, Taiwanese people can only marry foreigners from countries that also have gay marriage laws.

“Taiwan is Asia’s first, which means most of our neighboring countries do not recognize same-sex marriages,” Chien Chi-chieh, the secretary-general of the Taiwan Alliance to Promote Civil Partnership Rights, told AFP.

“So, if a Taiwanese has a partner from South Korea, Japan, Hong Kong, China, Malaysia, Vietnam, Philippines, they all can’t get married. There’s a huge number of couples like that in Taiwan,” she added.