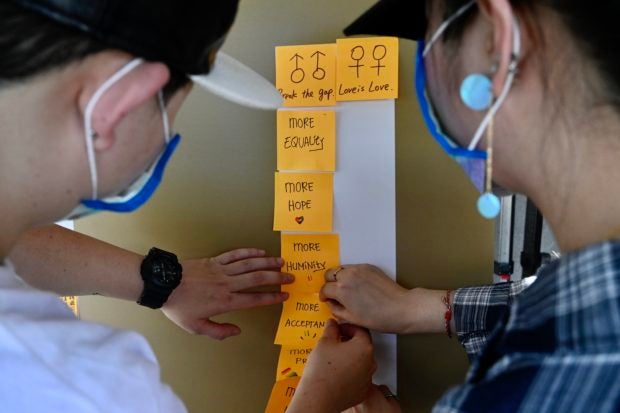 People paste notes on a ‘Lennon Wall’ in front of the Presidential Office in Taipei on May 17, 2020, calling on Taiwan’s government to reform laws to recognise international same-sex marriages. – Taiwan on May 17 celebrated the one-year anniversary of becoming the first in Asia to legalise same-sex marriages, with LGBT rights groups calling for full recognition of international unions. (Photo by Sam Yeh / AFP)

The island is at the vanguard of the burgeoning gay rights movement in Asia and became the first place in the region to legalize same-sex marriage after a bruising political fight.

But the gay marriage law still contains restrictions not faced by heterosexual couples.

Same-sex couples can only wed foreigners from countries where gay marriage is also recognized, and can only adopt their partners’ biological children.

Activists say the coronavirus pandemic has made it more urgent to allow all foreign marriages, as many international same-sex couples have been separated due to border controls and lockdowns in many countries.

“Last year we watched other couples get married but we couldn’t,” said Cho Yen-chun, 44, whose partner of three years is Hong Konger.

“It’s depressing enough, and now we can’t even meet because of the coronavirus.”

Around 3,600 couples have wed since the first legal gay weddings were held a week after the law was enacted last year.

“I hope President Tsai’s government can amend the law as soon as possible,” Cho said.

Tsai won a landslide victory in January when her party also retained a majority in parliament.

Her presidency is popular among Taiwan’s youth who are more supportive of her reform agenda.

Rights groups estimated at least 1,000 international same-sex couples are waiting for their unions to be recognised in Taiwan.

“There is no legal protection for us if we can’t get married,” said Malaysian Tan Bee Guat, 39, who has been staying in Taiwan on a student visa to be with her partner.

“I can’t be a student forever.”

Taiwan is home to a thriving LGBT community and its capital, Taipei, is due to host Asia’s Gay Games next year.

Last year a record 200,000 people attended a pride march in Taipei to celebrate the legalization of same-sex marriages.

“Marriage equality should not be restricted due to nationalities,” said Chien Chih-chieh, secretary-general of Taiwan Alliance to Promote Civil Partnership Rights.

“We hope the government can make it complete soon.”