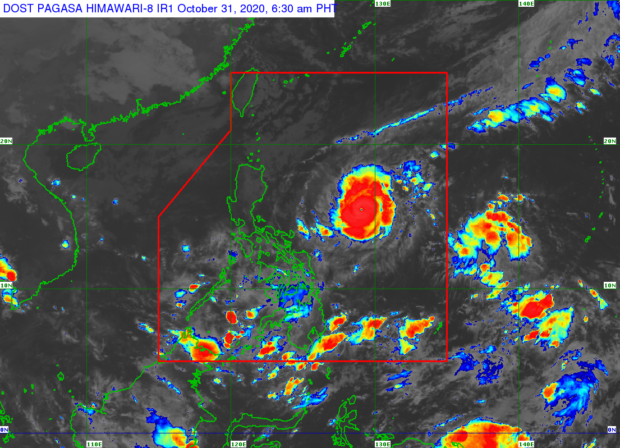 In its 5 a.m.  severe weather update, Pagsas reported that “Rolly” was last spotted 655 kilometers east northeast of Virac, Catanduanes, packing maximum sustained winds of 215 kilometers per hour (kph) near the center and gustiness of up to 265 kph., while moving west at 20 kph.

More areas were placed under Tropical Cyclone Wind Signal (TCWS) No. 1 while some parts of the Bicol region are now under TCWS 2, which may be upgraded to TCWS 3 later today.

“Owing to very favorable conditions, there is remains a possibility that this typhoon will reach Super Typhoon category over the next 12 hours. However, “Rolly” is more likely to be near Super Typhoon strength (185-215 km/h) by time it grazes Bicol Region and makes landfall over Quezon.” Pagasa warned.

“On the forecast track, “Rolly” will move west-southwestward today towards the sea off the coast of Bicol Region. Beginning tomorrow early morning, it will gradually turn towards the west-northwest, bringing its inner rainbands-eyewall region near or over Catanduanes and the Camarines provinces during the morning-afternoon hours and over Quezon-southern Aurora area during the afternoon-evening hours,” Pagasa.

Heavy to intense rains will be experienced tonight over the Bicol and Calabarzon regions, Metro Manila, Central Luzon, Marinduque, and the northern portions of Occidental and Oriental Mindoro, while Mmoderate to heavy rains will also be experienced over the Cagayan, Isabela, Nueva Vizcaya, and Quirino.

Flash floods and landslides are possible in rain-affected areas.

“Rough to phenomenal seas (2.5 to 15.0 m) will be experienced over the seaboard of areas where TCWS is in effect and rough to very rough seas (2.5 to 5.0 m) over the remaining seaboards of Northern Luzon and the eastern seaboards of Eastern Visayas (that are not under TCWS) and Caraga. Sea travel is risky for all types of seacrafts over these waters, especially those under TCWS,” Pagasa saod.

Moderate to rough seas (1.2 to 2.5 m) will be experienced over remaining seaboards of the country. Operators and crew members of small vessels are advised to take precautionary measures.