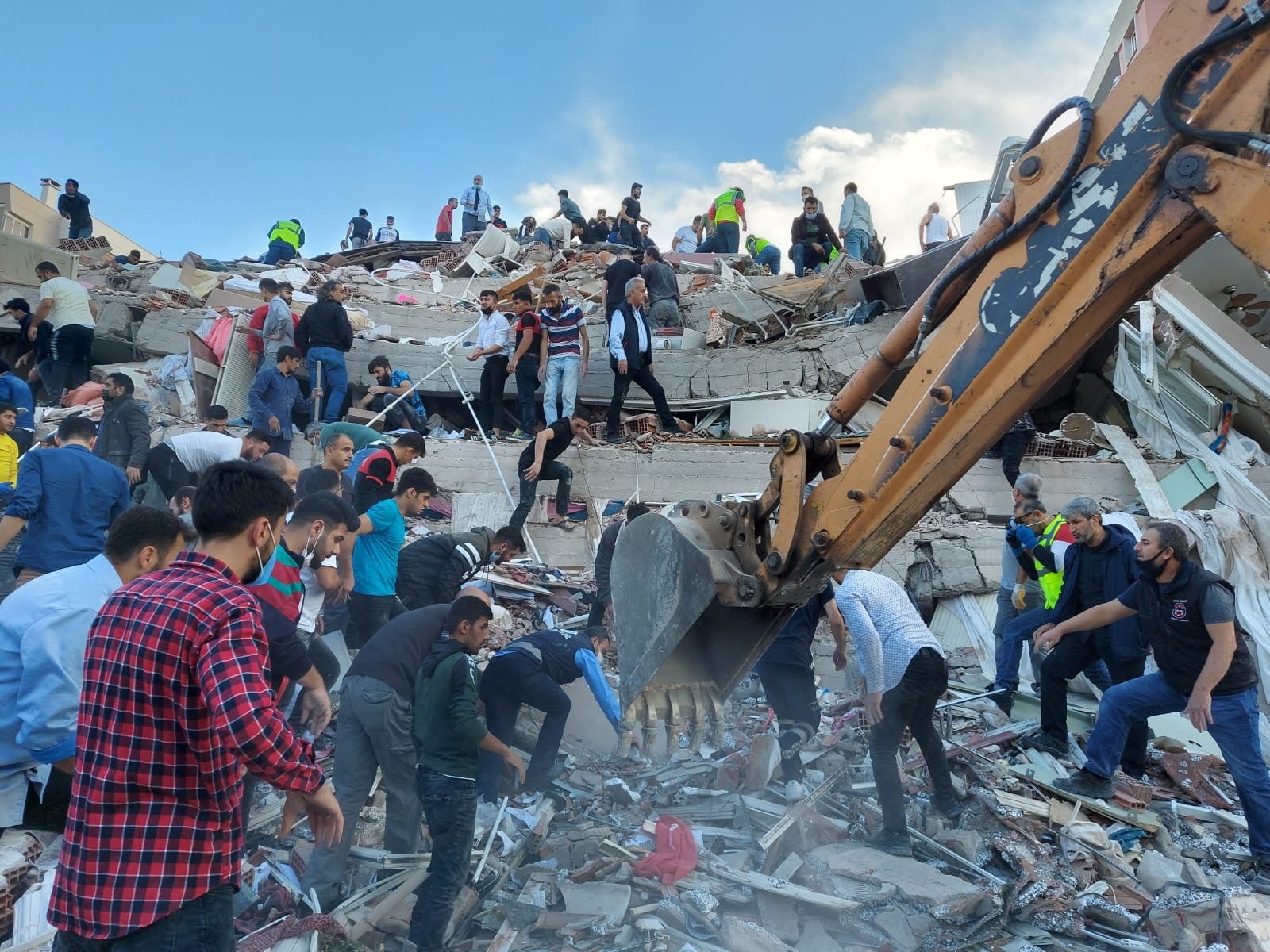 Locals and officials search for survivors at a collapsed building after a strong earthquake struck the Aegean Sea on Friday and was felt in both Greece and Turkey, where some buildings collapsed in the coastal province of Izmir, Turkey, October 30, 2020. REUTERS/Tuncay Dersinlioglu

ISTANBUL — A strong earthquake struck the Aegean Sea on Friday and was felt in both Greece and Turkey, where four people were killed as buildings collapsed in the coastal province of Izmir.

People poured onto the streets in panic in Izmir city, witnesses said, after the quake struck with a magnitude of up to 7.0.

The tremor could be felt as far away as in Istanbul and on Greek islands, where officials said eight people suffered light injuries on the island of Samos. High tidal waves were seen in both countries and led to flooding on parts of the Izmir coast.

Turkish state media quoted the Disaster and Emergency Management Presidency (AFAD) as saying four people died, one due to drowning, while 120 people were injured.

There were various reports of collapsed buildings with people stuck in the rubble in some of districts of Izmir and partial damage to property in several other provinces where the quake was felt, Turkish officials said.

Izmir mayor Tunc Soyer said around 20 buildings had collapsed in the province. Izmir’s governor said 70 people had been rescued from under the rubble.

Ilke Cide, a doctoral student who was in Izmir’s Guzelbahce region during the earthquake, said he went inland after waters rose after the earthquake.

“I am very used to earthquakes… so I didn’t take it very seriously at first but this time it was really scary,” he said, adding the earthquake had lasted for at least 25-30 seconds.

Crisscrossed by major fault lines, Turkey is among the most earthquake-prone countries in the world. More than 17,000 people were killed in August 1999 when a 7.6 magnitude quake struck Izmit, a city southeast of Istanbul. In 2011, a quake in the eastern city of Van killed more than 500.

Ismail Yetiskin, mayor of Izmir’s Seferihisar, said sea levels rose as a result of the quake. “There seems to be a small tsunami,” he told broadcaster NTV.

Footage on social media showed debris including refrigerators, chairs and tables floating through streets on the deluge. TRT Haber showed cars in Izmir’s Seferihisar district had been dragged by the water and piled on top of each other.

Residents of the Greek island of Samos, which has a population of about 45,000, were urged to stay away from coastal areas, Eftyhmios Lekkas, head of Greece’s organization for anti-seismic planning, told Greece’s Skai TV.

“It was a very big earthquake, it’s difficult to have a bigger one,” said Lekkas.

High tidal wave warnings were in place in Samos, where eight people were lightly injured, according to a Greek official.

“We have never experienced anything like it,” said George Dionysiou, the local vice-mayor. “People are panicking.” A Greek police spokesman said there was damage to some old buildings on the island, with no immediate reports of injuries.

The foreign ministers of Turkey and Greece – which have been caught up in a bitter dispute over ownership of potential hydrocarbon resources in the eastern Mediterranean – spoke by phone after the earthquake and said they were ready to help one another, Ankara said.

AFAD put the magnitude of the earthquake at 6.6, while the U.S. Geological Survey said it was 7.0. It struck at around 1150 GMT and was felt along Turkey’s Aegean coast and the northwestern Marmara region, media said.