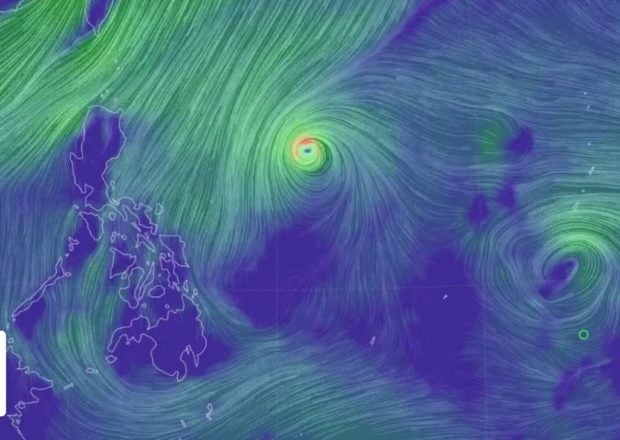 MANILA, Philippines — The United States Navy’s Joint Typhoon Warning Center (US-JTWC) made stronger intensity predictions of typhoon Rolly on Friday, believing that it would reach a maximum intensity of 150 knots, which translates to 277 kilometers per hour (kph).

The latest JTWC warning posted on its website shows that Rolly actually has that wind strength as of now, which means that it might be in a super typhoon category already according to standards set by the Philippine Atmospheric, Geophysical and Astronomical Services Administration (Pagasa).

Pagasa similarly said that Rolly would intensify further, but forecasters believe it would peak at around 195 kph — not as high as JTWC’s prediction.  However, local meteorologists noted that there is a slim chance that it would develop into a super typhoon due to its rapid intensification and current position over the Philippine sea.

But JTWC also predicted that it would weaken by Saturday to 130 knots or 250 kph, still within the super typhoon category.  On Sunday, when it is expected to make landfall over Aurora or northern Quezon province, it would only have maximum sustained winds of 120 knots, or 222 kph.

Pagasa’s latest severe weather bulletin showed that Rolly packs maximum sustained winds of 185 kph and gustiness of up to 230 kph.  It was last seen 980 kilometers east of Casiguran, Aurora, and is still moving west at a speed of 20 kph.

Rolly is still seen to turn southwest between Friday night and Saturday morning, continuing to move near the Bicol Region.  Between Saturday and Sunday, it may make as slight west northwest nudge, which means that it may make landfall over Aurora or northern Quezon province by Monday.

Tropical Cyclone Wind Signal No. 1 is already raised over Catanduanes, as it may start feeling wind speeds of 30 kph to 60 kph in the next 36 hours.