A paradise by the bay for booklovers 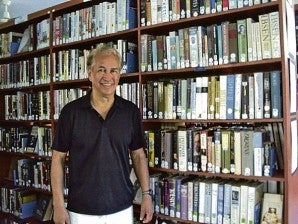 LEOCADIO Dioso Jr., a retired United Nations official, has put up a public library in his hometown in Pandan, Antique, to help develop the love for reading, especially among the children. NESTOR P. BURGOS JR.

PANDAN, Antique—Booklovers have found a paradise in a library by the bay in Pandan town in Antique.

The Leocadio Alonsagay Dioso Memorial Public Library keeps at least 25,000 books and other reading materials, which the National Library of the Philippines (NLP) considers one of the most extensive collections among public libraries in the country.

Pandan, a third-class municipality (annual income: P25 million-P35 million, pop.: 30,000) located 124 kilometers north of the provincial capital of San Jose, had no library until the Dioso Library opened on April 2, 2004.

“We need to promote reading, especially among children, but we cannot do this without books and libraries,” said Leocadio Dioso Jr., a retired United Nations (UN) official who funded the construction of the building.

Dionisio named the library after his father and donated most of the books to Pandan, his father’s hometown.

The library occupies a 1,712-square-meter lot along Juan Dioso Street, a few meters from the scenic Panday Bay and around 200 m from the town plaza.

Since it opened nearly more than seven years ago, 4,199 people have availed themselves of the free membership, which entitles them to borrow nonreference materials for three weeks. The library is open daily, except on Mondays.

Sancho Domenden, chief of the NLP’s public library division, said the library is comparable with or even better than provincial and city libraries because of its extensive collection and facilities.

The library is divided into the main collection hall, reading and reference room, children’s area, computer room and administrative office.

The main hall contains both fiction and nonfiction works arranged in shelves based on the Dewey Decimal Classification System. It includes a collection of video tapes and DVDs of general interest films.

The reading and reference room is equipped with 11 computers with free Internet access and has wide selections of encyclopedias, atlases, dictionaries and other reference materials.

In the children’s room are books and other educational materials for children and young adults. The area is also used for the library’s storytelling (“Read-Aloud”) sessions similar to the Inquirer’s Read-Along program.

The library also has a stage beside the main building for live educational and cultural programs and shows.

Dioso, 70, said the library was borne out of his passion for books and reading. “I never imagined building and donating a library, but I became excited about it,” he said.

Born in Patnongon town in Antique and the second of four siblings, Dioso grew up in Manila and went to New York where he eventually worked as an auditing and accounting clerk in 1961 in the UN headquarters. His father was a diplomat in the Philippine Mission to the UN.

Diosa rose from the ranks until he retired in 2001 as deputy head of the UN internal audit division.

Coming from a family of booklovers and readers, Dioso learned to love reading when he was a young boy and continued to be passionate about it even despite his hectic schedule with the UN.

His frequent travels, which involved hours of waiting in airports, also afforded him time to read. He also frequently went to the New York Public Library with his two sons.

“If I can’t go to a library every week, I get the shakes,” he said in jest.

When he retired, one of his problems was where to put his collection of books that filled up a two-car garage in his New York residence. He decided to donate the books to Pandan but was told by officials that they had no place for these.

From his savings and donations, Dioso decided to construct and donate a library on a family-owned lot. After he brought in his personal collection, he solicited donations from friends, colleagues and contacts.

He continued bringing in new books and materials every year, including used books bought in public libraries in the United States.

The municipal government supports the operation of the library with a P170,000 yearly subsidy, but Dioso said this was not enough to cover around P500,000 in annual operating expenses, including the salaries of the five staff members.

Pandan Mayor Jonathan Tan said the library is an invaluable contribution to the community, especially for residents who cannot afford to buy books. On Oct.17, 2007, the municipal council passed a resolution designating the library as the depository of the town’s historical records.

The provincial government presented the 2008 “Bugal kang Antique” (Pride of Antique) award for community service to Dioso as founder of the library.

Dioso said a lot remains to be done. He cited the severe lack of public libraries in the country despite the passing of Republic Act No. 7743 on June 17, 1994. The law mandates the creation, operation and funding of a public library in every congressional district, city and municipality in the country.

Dioso said he was planning to replicate the project in other areas of the country with the help of Filipino-American associations and other sponsors.

“We must develop the love of reading especially among children because it is fun and also a way for people to improve their lives,” he said.