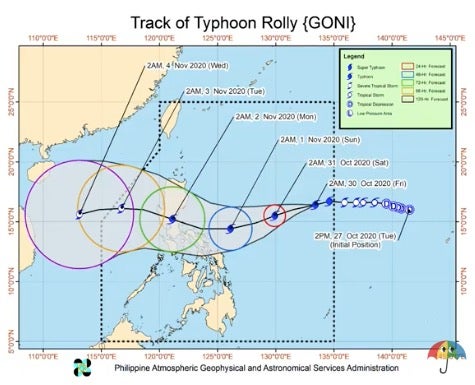 Forecast track of typhoon Rolly issued by Pagasa at 5 a.m. on Friday, October 30, 2020. (Image from Pagasa)

MANILA, Philippines — Tropical cyclone wind signals (TCWS) No. 3 and 4 may be raised in some parts of the country in the coming days as typhoon Rolly (international name “Goni”) is forecast to further intensify, the Philippine Atmospheric, Geophysical, and Astronomical Services Administration (Pagasa) said on Friday.

No locality is currently placed under TCWS. However, in anticipation of strong to near-gale conditions due to the typhoon, TCWS No. 1 may be raised over several provinces in the Bicol Region as early as Friday evening, Pagasa said in its weather forecast issued at 5 a.m.

“Given that it is likely for this typhoon to continue intensifying prior to landfall, the highest possible TCWS that will be raised throughout the passage of this typhoon will be TCWS No. 3 or 4,” Pagasa said.

The US Navy’s Joint Typhoon Warning Center earlier said the typhoon may quickly intensify into a “super typhoon” even before it makes landfall on Sunday.

The eye of the typhoon was last spotted 1,195 kilometers east of Central Luzon with maximum sustained winds of 140 kilometers per hour near the center and gustiness of up to 170 kph. It is currently moving westward at 20 kph.

Pagasa weather specialist Loriedin Dela Cruz said there was a “rapid intensification” of the weather disturbance in the past 24 hours as it rapidly turned into a typhoon.

She said that since the typhoon is still far from the country’s landmass, it still has enough time to further intensify before making landfall.

(In the next two days, it may move slightly southwest so its location may become lower towards the waters near the Bicol Region.)

But even if the center of the typhoon does not pass through the landmass of Bicol, its diameter may still hit the region, according to Dela Cruz.

(Even if the center of the typhoon does not pass through the landmass of Bicol Region, its diameter may still hit the region. This means strong winds and heavy rains may still occur in the northern portion of Bicol Region so we will still raise TCWS.)

(Based on our forecast track, after two days, the westward direction of Rolly will be established and we expect that it may happen in between Central Luzon and Quezon province.)

Dela Cruz also said that some islands north of Camarines provinces might be directly hit by the eyewall of the typhoon.

Aside from Rolly, Pagasa is also monitoring tropical storm Atsani outside the Philippine area of responsibility. The center of the tropical cyclone was last spotted 2,320 kilometers east of Mindanao. It has maximum sustained winds of 65 kph near the center and gustiness of up to 80 kph, and is moving north-northwestward at 20 kph.

Pagasa said the tropical storm is likely to enter PAR on Sunday or Monday. However, it is less likely to bring severe weather over any locality in the country over the next three days. Once it enters PAR, it will be named “Siony.”

For the weather forecast this Friday, Pagasa said the trough or extension of the typhoon will bring cloudy skies with scattered rain showers and thunderstorms in Visayas, Bicol Region, Northern Mindanao, and Caraga.

Batanes and Cagayan, meanwhile, will have cloudy skies with scattered rains and isolated thunderstorms due to the northeasterly surface wind flow.

Metro Manila and the rest of the country, on the other hand, will experience partly cloudy to cloudy skies with isolated rain showers due to localized thunderstorms.