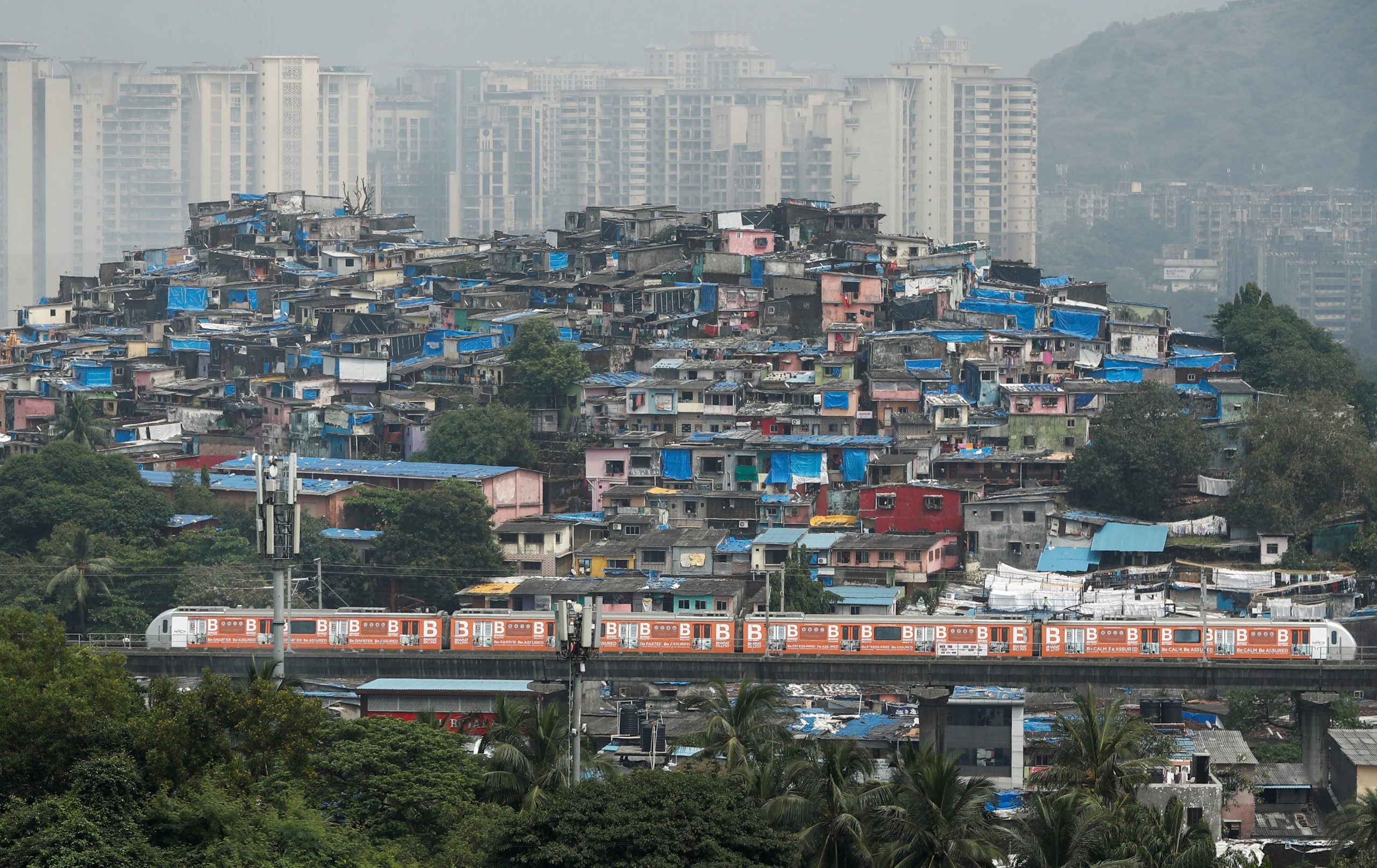 POST VIRAL WORLD A commuter train passes through a slum in Mumbai after it restarts operations in the time of COVID-19. As the contagion spreads, India’s biggest city turned its ritzy racecourse into a sick ward, while Airbnb connected medics in France and Italy to free flats, among ways in which the world’s urban centers are coping with the contagion and preparing for a postviral world as the pandemic exacerbates the widening
economic and social divide. —REUTERS

LONDON—Downtowns are deserted and happy hour is history as a second coronavirus wave hits cities from London to Kuala Lumpur, leaving futurologists predicting which changes to urban living are here to stay in a postviral world.

Looking back in history, epidemics breed overhaul and innovation, with city sewage systems, public transit and housing regulations all owing their existence to past pests and plagues.

Amid the COVID-19 pandemic, all corners of city life—from home to office, park to pub—are undergoing a reboot, with some cities increasing parkland, others cycle lanes, flats redesigned to work at home and one cafe using inflatable hats to distance.

But whether the changes address the widening economic and social divide urban dwellers were witnessing before the pandemic is the big question for the seven in 10 people projected to live in cities by 2050.

“We have known that growing inequality is a real problem for the economic and social health of cities. But the effects of the pandemic are exacerbating divides.”

Unemployment rates have rocketed due to lockdowns and inequalities—between low and high earners, young and old workers, and for ethnic minorities—could worsen without reforms to how our cities function, researchers warn.

With the virus showing no letup, politicians predict a long haul to recovery, with more than 44 million people infected so far and the death toll topping 1.1 million, according to a global tally by Johns Hopkins University.

Governments have been racing to house an estimated 1.8 billion people who are homeless or live in inadequate housing and are uniquely at risk of contagion.

“The pandemic has highlighted, more than ever before, how integrally linked housing is to health and life,” said Shivani Chaudhry, executive director of advocacy group Housing and Land Rights Network (HLRN) in Delhi.

Officials scoured cities for vacant spaces or disused buildings to turn into makeshift shelters and homes.

The outbreak has spurred a boom in survival retreats or “bugout” properties—remote, concrete bunkers stocked with months’ worth of food supplies.

In Rotterdam, architect Harm Timmermans created a 16-square grid design for a marketplace that can be quickly assembled in public squares for local shopping at a safe distance.

From Singapore to Estonia, business is exploiting technology to help people work and travel, with apps, scanners, check-in systems, and so-called immunity passports.

For many, home is the new workplace.

This has spurred architects to reconfigure bijou flats for a new dual life with sliding walls and secreting desks.“If people now are going to be able to work from home on a far more regular basis they need to have the ability to have a real work-life space and structure at home,” said Greg Verabian of architecture firm HKS in Los Angeles.

Employees must prepare for a “new data-driven world where conversations about data and privacy are as vital as traditional concerns around pay and conditions,” Pakes said.

“In response to that we’ve seen a wave of open streets, which are closed to or significantly restricting cars,” he said.

The Portuguese city of Braga has opened squares, sidewalks, parks and more to restaurants and businesses seeking to cater to customers with social distancing.

Economic boost aside, cities also see a health benefit in maxing out on green space as residents swamp parks for exercise and space, company and well-being.

In June, Bangkok opened a new park built on an elevated rail line that lay unused for decades, which it hopes will serve as a model for “greening” abandoned spaces.

Park life in a pandemic has also exposed a hidden inequality over access, with the poorest often shut out of public spaces.

“In Mexico City, the wealthiest neighborhoods have 35 times better access to public space within a 20-minute trip than the poorest,” said Dasgupta of WRI.

City transport networks have been devastated after losing millions of commuters and tourists.

“Transit systems are in a very precarious situation with plummeting ridership,” said Dasgupta. “And without public transport, cities can’t survive in the long term.”

Crowd management is key, with a Transport for London app showing which stations are crowded, when distancing is feasible, and what alternatives exist for bike or foot.

Dozens of cities installed electric car charging stations or gave parking spots to cyclists, hoping to save cash and build resilience by fighting both climate and virus.

“More people are walking and cycling all over the world, from Kampala to New York,” said Dasgupta. “In Philadelphia, cycling increased by more than 150 percent during the pandemic.”

After being cooped up for months, city dwellers must re-learn how to socialize.

US retail giant Walmart converted 160 of its parking lots into summer drive-ins.

But many venues may not recover without a live audience, experts say, prompting Britain to pledge its biggest ever investment for culture, at $2 billion.

“I want all our cultural institutions to return to normal,” said Digital, Culture, Media and Sport minister Oliver Dowden.

Whatever the next version of normal looks like, many changes are here to stay, said Berkowitz of Resilient Cities Catalyst.

What may have started as emergency measures like open streets or alternative transport will help cities plan for the next shock—“whether that’s climate change, civil unrest or an economic shock.”