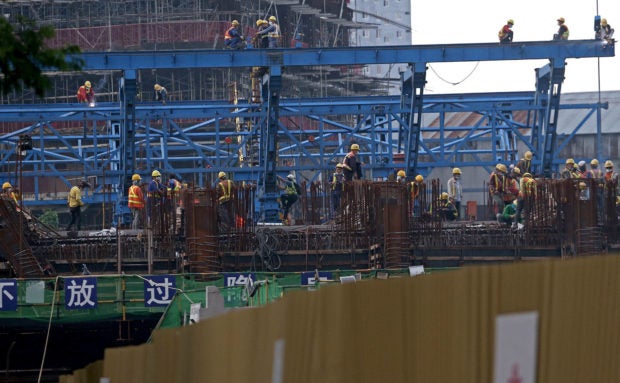 CHINESE PRESENCE Chinese workers help build the China-funded Estrella-Pantaleon bridge project to connect Mandaluyong and Makati cities. Sen. Francis “Kiko” Pangilinan is seeking a Senate investigation into the presence of 4 million Chinese nationals in the country since 2017, saying it has national security implications amid fears of an “orchestrated soft invasion” by China. —RICHARD A. REYES

MANILA, Philippines — Malacañang on Thursday said it welcomes the proposal to investigate the unhampered entry of millions of Chinese nationals into the Philippines which is feared to be the start of an “orchestrated soft invasion” by China.

(The President respects the power of the Senate to conduct an investigation in aid of legislation and by way of oversight on any government program.)

“So that’s welcome,” he added.

Opposition Senator Francis Pangilinan has called for an inquiry into the “national security implications of the entry of around 4 million Chinese into the country since 2017.”

The senator said the influx of Chinese nationals in the country is “worrying,” especially with the ongoing territorial dispute between China and the Philippines over the West Philippine Sea.

Pangilinan’s call stemmed from the findings of a Senate committee that corrupt Bureau of Immigration (BI) officers had allowed the entry of 4 million Chinese nationals since 2017 in exchange for billions of pesos in bribes through various rackets.

Also, during the Senate budget hearing of the Department of Tourism, the Philippine Retirement Authority revealed that Chinese nationals comprise the biggest population of foreign retirees in the country, accounting for nearly 40% or about 28,000, with the retirees as young as 35 years old.

The two countries have been into a longstanding territorial dispute over the South China Sea, which China claims entirely, including parts of Philippine territory.

A 2016 ruling by the Permanent Court of Arbitration (PCA) invalidated China’s claim in the disputed waters. But the Asian powerhouse refused to acknowledge the ruling and continue its militarization in the disputed areas. Meanwhile, President Duterte has chosen to shelve the landmark ruling in exchange for Chinese economic perks to help fund his administration’s infrastructure projects.