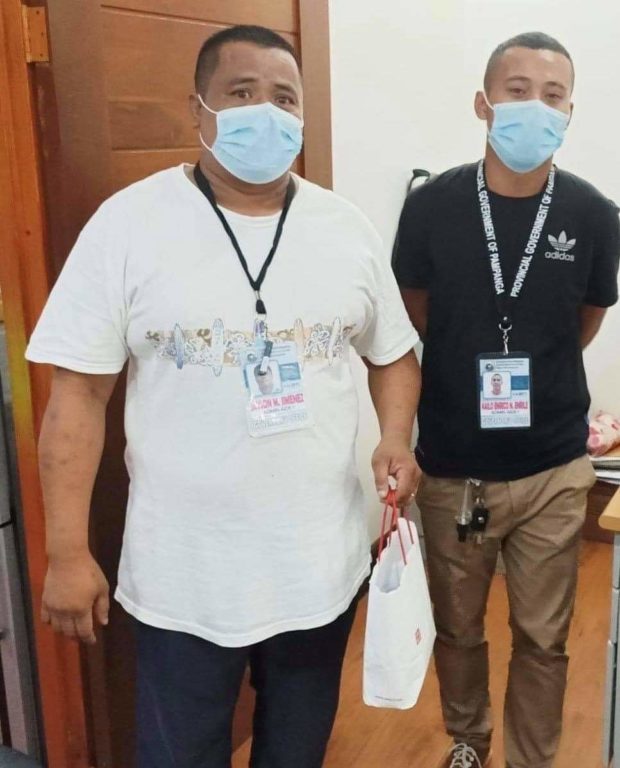 HONEST GUARDS. Jason Jimenez (left) and Kailo Enrile return the P200,000 they found tucked inside a white paper bag in a toilet at the Pampanga capitol. It was left by a quarry operator who bought booklets of quarry receipts on Monday. Photo courtesy of Luisse Rutao

CITY OF SAN FERNANDO — Two civilian security personnel of the Pampanga provincial government on Wednesday turned over to the owner the P200,000 they found inside a toilet at the capitol.

Jason Jimenez and Kailo Enrile returned the money to quarry operator Reynaldo Carlos, who was tracked down through a receipt found in a white paper bag that contained the cash.

Carlos inadvertently left the money in the men’s toilet on the first floor after buying a few booklets of quarry receipts at the treasurer’s office on Monday.

Jimenez and Enrile found the paper bag during a regular inspection. They immediately handed the money to the Office of the Governor, where the bills were counted and secured.

They said they returned the money because the governor had advised capitol employees to be honest and hardworking.

“They embodied honesty in civil service and are worth emulating,” Gov. Dennis Pineda said in a statement.

(Amid difficulties in life, they proved that there are still good people during these times.)

Jimenez and Enrile, who are employed as casual and job-order, respectively, have been recommended for promotions.

Read Next
Barangay Ilaya in Las Piñas now COVID-19 free
EDITORS' PICK
Acer Philippines welcomes you to its first flagship store
PNP’s Covid-19 cases jump to 9,809; 52 new infections logged
Is your company a growth champion? Stand up and be recognized!
More than 150 National Guard in Washington for Biden inauguration test positive for coronavirus
New Year, New Rediscoveries
Pope Francis to miss events due to new flare up of leg pain—Vatican
MOST READ
Dustin Poirier knocks out Conor McGregor at UFC 257
Ellen DeGeneres, too, is baffled by viral Filipino soda ad
WATCH: Alex Gonzaga joined by family in Amanpulo honeymoon
Wife stabs husband after seeing her younger self in old photos, thought he was cheating
Don't miss out on the latest news and information.