50 families displaced by clash between Army, NPA in Cotabato town 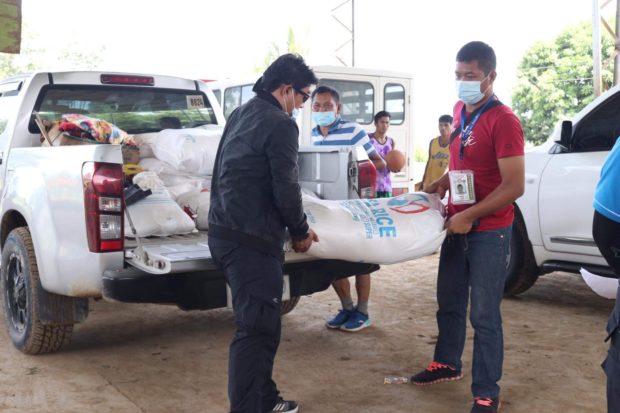 FOOD AID. Personnel of the Cotabato provincial government deliver sacks of rice and food packs to evacuees in Matalam town who fled their homes due to the clash between Army soldiers and communist rebels last Oct. 24. PHOTO COURTESY OF THE COTABATO PROVINCIAL GOVERNMENT

KIDAPAWAN CITY — At least 51 families were displaced from their homes in a village of Matalam town, Cotabato province following a clash between government troops and New People’s Army (NPA) rebels last Saturday, Oct. 24.

The 30-minute clash occurred in Sitio Rudson of Barangay Arakan, resulting in the death of a certain Zaldy Gulmatico Pulido, whom the military identified as the leader of an NPA guerrilla front operating in the province.

Mantawil said the villagers are still afraid to return home as tension remains high because Army troopers are still pursuing the rebels, who are still believed holed up in a forested part of the village.

“We are still waiting for a go-signal from the authorities when it will be safe (for them) to go home,” Mantawil explained.

He called for donations of mats, water, food, hygiene kits and mosquito nets for the evacuees.

Cotabato Governor Nancy Catamco has visited the families and gave them food packs and sacks of rice.

Catamco asked the military to ensure the safety of the villagers once they decided to return home.

“What we want is peace of mind for our people. We urge both the military and the rebels to spare the civilians from any harm,” Catamco appealed.

Brig. Gen. Roberto Capulong, commander of the Army’s 602nd Infantry Brigade, said the military troops were doing foot patrol when fired by the rebels positioned in the mountainous portion of the village.

Using a chopper on Tuesday, the military dropped into the mountainous villages hundreds of leaflets that urged the rebels to surrender.

At least a dozen NPA fighters are still in the area, said Capulong, citing information shared by locals.

The military officer said the rebels continue to operate in the province, mainly in the hinterlands of Magpet, ARakan and President Roxas towns, because they are still able to extort money from businesses, particularly contractors.

Much of the rebel force is from among the ranks of indigenous peoples, Capulong added.