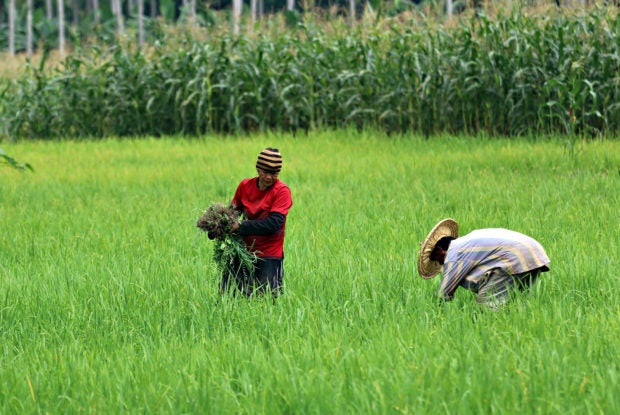 COMPETITIVE PRICE Farmers work in a rice field in Mamasapano, Maguindanao, in this 2019 photo. The Bangsamoro government says it is ready to offer the region’s farmers competitive prices for their palay harvests. —ERWIN MASCARIÑAS

DAVAO CITY, Davao del Sur, Philippines — The Bangsamoro government has set aside P500 million from its contingency fund to buy rice from farmers in the region at a price higher than those prevailing in the market, according to a top regional official.

Naguib Sinarimbo, the interior minister of the Bangsamoro Autonomous Region in Muslim Mindanao (BARMM), said this was the only way that the government could encourage farmers to plant and promote food self-sufficiency in the largely agricultural region.

Rice production in the BARMM remains high despite the new coronavirus disease (COVID-19) pandemic since farmers who were unaffected by the lockdown have not stopped planting, he said. But instead of being rewarded for their increased yield, they were aghast to see farm-gate prices of palay plummeting to as low as P11 a kilo last month.

“They’re complaining because the current prices can’t even recover their expenses,” Sinarimbo said during the virtual forum, Salig Bangsamoro.

This prompted the BARMM to set aside P500 million from its P13-billion contingency fund for the Ministry of Agriculture, Fisheries and Agrarian Reform to procure rice from the farmers, he said.

Bangsamoro Chief Minister Ahod Ebrahim and Sen. Juan Miguel Zubiri were among the Mindanao leaders who signed last month a resolution of the Mindanao Development Authority (MinDA) governing board, asking Congress to review the rice tariffication law (Republic Act No. 11203) that was blamed for the sharp drop in the buying prices of rice.Production cost

The law, which was implemented in March last year, removed the quantitative limits to rice imports and set higher tariffs that would go into the Rice Competitiveness Enhancement Fund to support the local rice industry.

Secretary Emmanuel Piñol, the MinDA chair, earlier noted that the farm-gate prices of palay, or unmilled rice, in some parts of Mindanao had dropped to P11 a kilo from P22 two years ago.

Piñol said current palay buying price was below the average production cost of P12 a kilo.

Sinarimbo said the BARMM’s contingency fund would be used to improve public access to basic services, utilities and other facilities that was already difficult before the onset of the pandemic.

Part of the emergency response would also be to revive the economy, he said.

“[To bring] the services to the level of the barangay, we plan to hire 2,590 health-care workers who will be deployed to all barangays in the region. But part of our economic recovery component will [also involve] infrastructure at the level of communities, [such as the] construction of barangay roads to … provide alternative jobs to displaced workers,” Sinarimbo said.