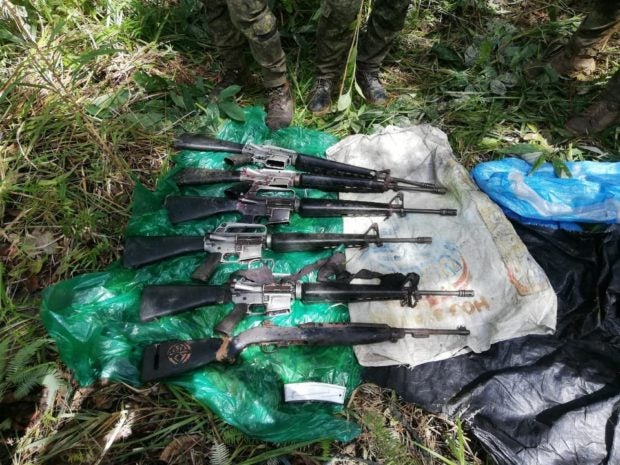 The military presents M-16 rifles and other firearms found in a digging in a Zamboanga del Norte town and believed to belong to NPA guerrillas. PHOTO FROM WESTMINCOM

Brig. Gen. Leonel Nicolas, head of the Army’s 102nd Infantry Brigade, said soldiers were led to where the guns—five M-16 assault rifles and an M1 carbine rifle — by two ranking NPA leaders who had surrendered in the Zamboanga Peninsula.

Also found in the digging in the town of Gulalac were bullets, bandoliers, magazines, a rebel flag, medical and dental equipment and medicines.

Nicolas identified the informants as a certain Cinderela Yursua, 54, aka Ason, and Antonio Roda, 51, aka Dondon.

While being interrogated, the two volunteered information about the supposed NPA arms cache, Templonuevo said

He said Yursua was secretary of a guerrilla front while Roda was finance and logistics officer of the western Mindanao regional committee of the communist movement.

Nicolas said the firearms were eligible for compensation under the government’s Enhanced Comprehensive Local Integration Program, which was meant to lure rebels into surrendering and has received billions of pesos of funding from the national government.

“We hope to see more of them, productive and better citizens, and future peace building partners in the community,” Ponio said.