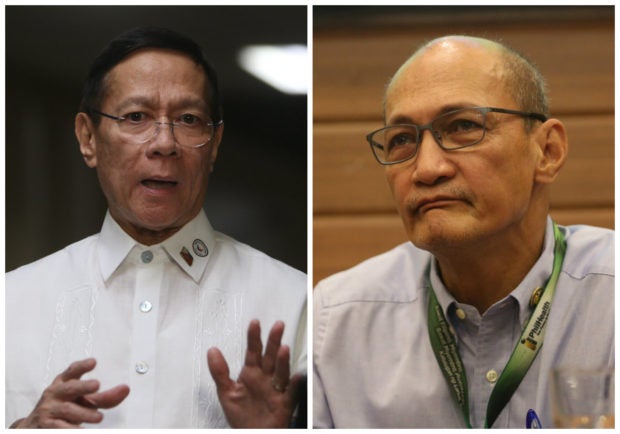 MANILA, Philippines — Two committees in the House of Representatives approved a report recommending the filing of administrative and criminal charges against Health Secretary Francisco Duque III and other officials over the alleged anomalies in the Philippine Health Insurance Corp. (PhilHealth).

The members of the House committees on public accounts and good government and public accountability approved the report Tuesday, which was based on the hearings conducted to investigate, in aid of legislation, the alleged corruption in the state insurance agency.

During the hearings, several issues were tackled such as the interim reimbursement mechanism (IRM), the need for amendatory and remedial legislations, and irregularities in the implementation of all-case rate system.

IRM is an emergency cash advance measure of PhilHealth to provide hospitals with an emergency fund to respond to natural disasters, calamities as well as other unexpected events.

But the joint committees pointed out that there are “abuses” in the implementation of the IRM even if PhilHealth officials maintained that it has long been used in times of “fortuitous events” such as Typhoon Yolanda back in 2013, Malawi siege in 2017, and the recent Taal Volcano eruption this year.

“While the idea behind the IRM may be commendable, the mechanism itself is flawed and encourages large-scale corruption and collusion between PhilHealth officials and [healthcare institutions], and while the program uses the term reimbursement, the IRM is actually a cash program, the legal basis of which PhilHealth has failed to provide this investigative body,” the joint committees said in the report.

The joint committees said the IRM was made available even to non accredited HCIs and non-PhilHealth accredited healthcare professionals.

“PhilHealth submitted reports on private hospitals, including dialysis and maternity clinics, even those that did not treat or admit COVID-19 patients, which were given more funds than some public hospitals with COVID-19 patients,” the joint committees said.

The joint committees also questioned the legal basis of the IRM, calling it “unclear.”

“Despite this, some P15 Billion pesos of funds have been distributed by PhilHealth to various HCIs all over the country,” the House panels said.

“In what is arguably the most notorious instance of corruption to date that is connected to the corporation, PhilHealth officials involved in the illegal disbursement of public funds through this mechanism anchor their defense on blurry interpretations of the law, none of which will hold water in court,” they added.

Moreover, the joint panels pointed out other issues related to the IRM such as that funds are used for non-COVID-19 cases, and that PhilHealth allowed the use of COVID-19 case rates for merely suspected or probable COVID-19 patients.

Citing the Commission on Audit (COA), the House panels also pointed out irregularities in the implementation of the all-case rate system of the PhilHealth.

Under the case rate system, reimbursements for claims all follow fixed amounts, or case rates, which PhilHealth determines for each illness. This contrasts with PhilHealth’s previous fee-for-service system, where payments were determined according to actual expenses of HCIs.

But the House panels said the use of incorrect case rates resulted in overpayments and underpayments.

Citing a COA report, the lawmakers said PhilHealth had already overpaid hospitals P102.5 billion between 2013 to 2018, while estimated losses to fraudulent activities amounted to PhP 51.2 billion—giving a total estimated amount of loss from 2013 to 2018 of about P153.7 billion.

“COVID-19 is a new disease, which health policymakers must continue to study to determine the appropriate treatment and protocols. Given that medical practices for the disease are still evolving, it was disadvantageous for PhilHealth to insist on fixed case rates for its reimbursements as early as April 2020,” the House panels said.

“In summary, while PhilHealth claims it is struggling financially due to the ongoing COVID-19 pandemic and asserts that its remaining actuarial life is down to one year, the Joint Committees find, based on the data provided in the several submissions by PhilHealth, that PhilHealth has been overspending on COVID-19,” they added.

The House panels likewise recommended that the Department of Justice file the appropriate charges against officials and board members of healthcare institutions and organizations that committed fraudulent acts such as upcasing, overbilling, harboring ghost patients or recruitment practice, abuse of authority vested upon the health care provider, or performance of a fraudulent act.

Charges were likewise recommended over what the House panel called “disadvantageous settlement of cases” with healthcare institutions and private firms.

These include cases involving the following: