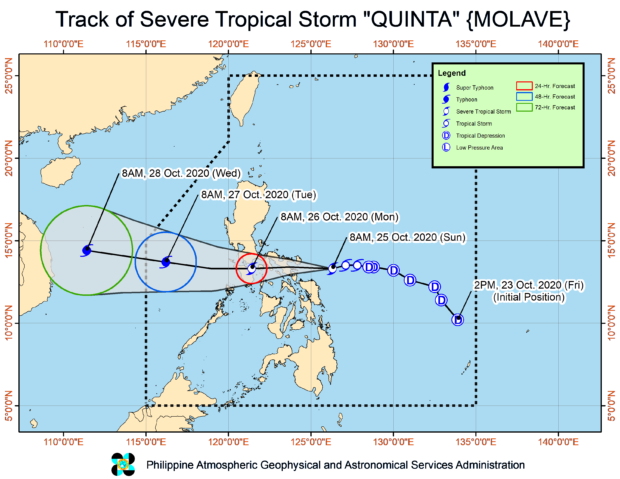 MANILA, Philippines — At least three people have been killed from Typhoon Quinta (international name: Molave) that devastated parts of Luzon and Visayas.

National Disaster Risk Reduction and Management Council spokesperson Mark Timbal said Tuesday that the fatalities included a 60-year-old woman from the town of Siaton and a man of undetermined age from Bindoy, both in Negros Oriental.

The third fatality was from Mogpog, Marinduque. All of the three victims reportedly drowned.

Timbal said 13 people remained missing, including a crew member of a yacht that sank off Bauan, Batangas; one from Odingan, Romblon; a fisherman from Iloilo; another from Negros Oriental; and nine fishermen from Catanduanes and Camarines Sur.

The number of people affected by the typhoon has reached 914,709 persons or 237,948 families from Cordillera Administrative Region, National Capital Region, Central Luzon, Calabarzon, Mimaropa, Bicol region and Visayas. Over 77,000 residents or around 22,000 families were taking shelter in evacuation centers, Timbal said.

Typhoon Quinta is expected to exit the Philippine area of responsibility within the day.