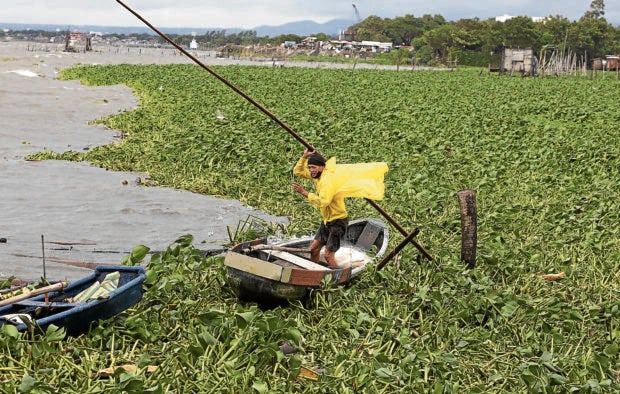 TILTING AT WINDS Battling strong gusts of winds induced by Typhoon “Quinta,’’ a fisherman balances himself on his boat as he attempts to catch something for the family’s lunch in the swollen, hyacinth-littered Laguna de Bay in Bayanan, Muntinlupa City, on Monday. —MARIANNE BERMUDEZ

No deaths were reported, but 12 fishermen were missing in Catanduanes province, according to the National Disaster Risk Reduction and Management Council (NDRRMC).

Seven fishermen from Tabaco City, Albay province, were also reported missing at the height of the typhoon, but six of them were later found in Virac, Catanduanes. The seventh, 50-year-old Joselito Ouapeuprecua, was still missing as of Monday afternoon.

The Philippine Coast Guard said it rescued seven of eight crew members of a yacht that capsized off Bauan town in Batangas.

Quinta (international name: Molave), packing wind speeds of 125 kilometers per hour and gusts of up to 150 kph, triggered flooding and prompted forced evacuations of tens of thousands of people in the Bicol, Calabarzon and Mimaropa regions.

As of 4 p.m. on Monday, the typhoon was located 310 km west of Calapan City, Oriental Mindoro province, moving westward at 25 kph, the Philippine Atmospheric, Geophysical and Astronomical Services Administration (Pagasa) said. It was expected to leave the Philippine territory on Tuesday morning,

Local disaster councils on Sunday were able to evacuate 27,946 families (106,350 people). They have started sending home more than 18,000 families (64,000 people) as the weather improved on Monday, the OCD Bicol said.

In Calabarzon, the number of evacuees and affected residents rose to 2,061 families (8,141 people) across 108 villages. In Mimaropa, 762 families (2,964 people) were staying in temporary shelters.

In Pampanga province, water from the upstream of the Pampanga River worsened floods in 50 coastal villages where high tide raised water levels to 1.5 meters.

Bustos and Ipo dams in Bulacan province released water, submerging at least 21 low-lying villages in the towns of Calumpit and Hagonoy in floodwater that reached up to 1.5 meters on Sunday, officials said.

As of Monday noon, portions of 21 national roads were impassable due to road cuts, landslides, mudflows, collapsed bridges, sunken pavements, fallen trees and electrical posts, and flooding, according to the Department of Public Works and Highways (DPWH).

According to the Coast Guard, the yacht, the MV Oceanic Explorer 3, sank in rough seas while anchored off Keppel shipyard in Barangay San Roque, Bauan, around 7 a.m. on Monday.

AFTERMATH Public works personnel on Monday chop down trees that fell on Roxas Boulevard in Manila at the height of Typhoon “Quinta,’’ which struck Luzon island on Sunday, while Frida Fajardo (right photo) tries to sweep off floodwaters in her house in Santa Lucia village, Calumpit, Bulacan province. —MARIANNE BERMUDEZ/NIÑO JESUS ORBETA

Bustos Dam discharged water at up to 375 cubic meters per second (cms) on Saturday when its water elevation reached 17.01 meters above sea level (masl), which was near its spilling level of 17.34.

The water elevation at Ipo Dam was at 101.25 masl on Sunday, slightly above its 101-masl spilling mark, forcing dam officials to release water at 200 cms.

As of 4 p.m. on Monday, Quinta had rendered unavailable 13 69-kilovolt power transmission lines, one 230-kv line and two 5000-kv—mostly in Calabarzon and Bicol.

According to National Grid Corp. of the Philippines, the affected 69-kv lines are Batangas-Mabini,