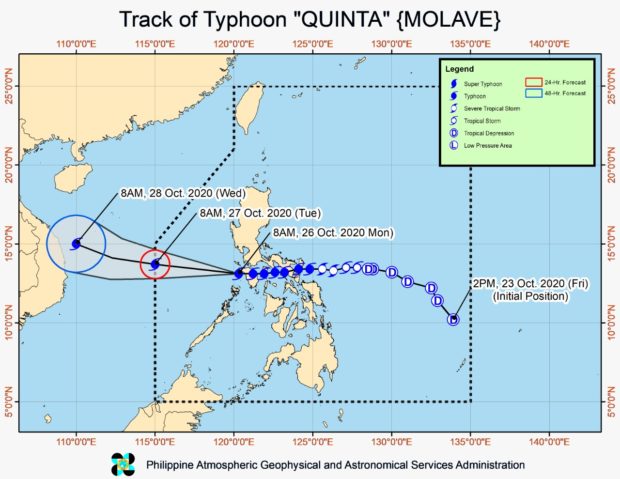 MANILA, Philippines — Only one area in Luzon remained under Tropical Cyclone Warning Signal No. 3 while Metro Manila is currently under Signal No. 1 as Typhoon Quinta is now over Mindoro strait while maintaining its strength on Monday, the Philippine Atmospheric, Geophysical and Astronomical Services Administration (Pagasa) said.

Meanwhile, the following areas remained under Signal No. 2:

Signal No. 1 was also placed over the following areas:

It is packing maximum sustained winds of 125 km per hour and gustiness of up to 150 kph, moving westward with a speed of 25 kph.

Pagasa said Quinta will continue to move westward until Monday afternoon and will turn west-northwestward towards the western boundary of the Philippine Area of Responsibility.

The typhoon is seen to re-intensify and may reach its peak intensity within 24 to 48 hours.

It is likewise seen to exit PAR on Tuesday morning.

Due to the tail-end of a frontal system, moderate to heavy rains will be experienced over Cagayan, Apayao, Kalinga, Abra, Ilocos Norte, and Ilocos Sur.

The weather bureau warned of possible flooding (including flash floods) and rain-induced landslides, especially during heavy or prolonged rainfall.

Meanwhile, areas under Signal No. 1 will have strong breeze to near gale conditions.

Due to the northeasterly surge, strong breeze to gale conditions will also prevail over Ilocos Region, Batanes, Cagayan, Apayao, and northern Zambales.

“Sea travel is risky for all types of sea vessels over these waters,” the weather bureau said.

Meanwhile, moderate to rough seas will be experienced over the other seaboards of the country.

The weather bureau is also monitoring a low pressure area, which was located at 1,920 km east of Southern Luzon at 10 a.m. on Monday.

Pagasa said the LPA may enter PAR on Wednesday or Thursday morning, but it is “less likely to develop into tropical depression in the next 48 hours.”