From Boracay, migrants return in droves to Mindanao 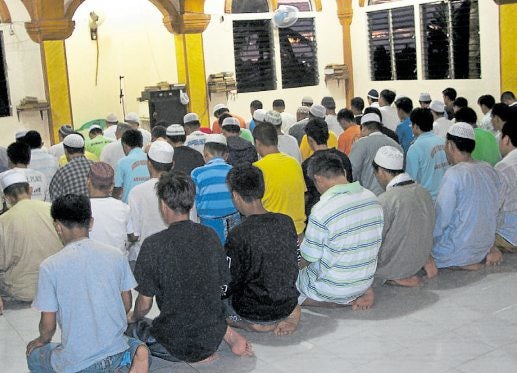 PRAYER Members of the Muslim community in Boracay pray at one of the two mosques on the island. —NESTOR BURGOS JR.

ILOILO CITY, Iloilo, Philippines — For the past 22 years, Mahid Bani has been selling pearl jewelry to tourists and balikbayans (returning Filipino expatriates) on Boracay. But since February, when the COVID-19 pandemic started, tourists have stopped coming to the resort island due to travel restrictions and community quarantine measures.

“Most of these days, I don’t have a single peso. I ask for help from friends, relatives and neighbors. You have to be thick-faced to survive,” Bani, 48, told the Inquirer in a phone interview last week.

Muslim vendors like Bani and others who rely on tourists for livelihood now depend on food assistance, even infant formula, from the government and the community.

The pandemic has hit hard Boracay’s Muslim community, forcing more than 80 percent of its members to leave and return to their home provinces in Mindanao due to lack of livelihood.

On Oct. 5, 110 Muslim residents were brought by the Office of Civil Defense in Western Visayas from the island to Iloilo City en route to Lanao del Norte, Lanao del Sur and Misamis Oriental.

Another batch of 121 left for Iloilo City on Saturday.

Most of them have been selling souvenir items, jewelry and clothing to tourists.

Tourists from Western Visayas were allowed in Boracay starting on June 16 and from other areas on Oct. 1, but tourist arrivals are still negligible compared to the 3,000 to 5,000 who visited the island daily before the pandemic.

“We have been severely affected [by the pandemic] and we are dependent on government aid and support from other Muslim communities,” Muamar “Faisal” Arumpac, president of Boracay Muslim Association for 25 years, told the Inquirer.

“This is the worst crisis we have faced. We lost all that we have invested for many years,” he said.

From around 3,000 members before the pandemic, the Muslim community at Sitio Ambulong in Barangay Manoc-Manoc now has about 500, of whom 10 percent are school-age children.

Arumpac said the residents started leaving after the island was closed to tourists. Many of them left only a family member to watch over stores or stalls.

Those who cannot afford to to pay for their trip were left behind and are the ones being repatriated by the government. They receive food assistance from nearby Muslim communities and in Iloilo City.

“Some will come back if the situation improves … but many said they will not return,” Arumpac said.

Around 80 percent of those who left are from Lanao.

Non-Muslim residents are also struggling to cope with the pandemic.

“Some of our Christian brothers and sisters are worse off because they do not have assistance other than that provided by government agencies and the local government. That is why we also help them if we can,” Arumpac said.

Bani said he received P6,000 under the government’s social amelioration program and rice assistance from the village and municipal government.

But he said these were not enough to support his wife and four children, including one who will turn 2 years old in November.

Bani is not giving up, though. He has no plans to go back to Manila where he was born or to relatives in Mindanao.

“I am preparing in case more tourists will come. I hope someone can loan me capital so I can start again when this is over,” he said.