‘Kalibasib’ gone but still a model in saving tamaraw population 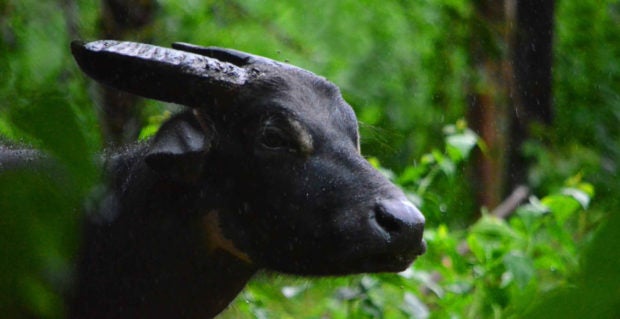 CONSERVATIONSYMBOL “Kalibasib” was the lone tamaraw born and raised in a gene pool center in Occidental Mindoro until his death on Oct. 10. He died at 21, within the 21-to-25- year life span of the highly endangered species. —PHOTO COURTESY OF GREGG YAN/UNDP BIOFIN

It felt like losing a child of his own, said Eduardo Angagan, 65, who began looking after “Kalibasib” when the tamaraw, also known as Mindoro’s dwarf buffalo, was only 3 years old.

“He was elusive at first but we eventually found a way to tame him. He also grew fond of eating ripe bananas all the time,” Angagan recalled.

Kalibasib, from the phrase “kalikasan bagong sibol,” or nature newly sprung, was the only tamaraw successfully bred in captivity. His death on Oct. 10 from cardiac failure marked an end to a chapter in the government’s attempt in 1980 to repopulate the critically endangered animal species.

“My children were all saddened. If not for Kali, I wouldn’t have sent all nine of them to school,” said Angagan, who joined the TCP as a ranger in Mt. Iglit-Baco National Park in 1996.

Kalibasib was buried in a 5-foot deep grave—or at least some parts of him.

Also on Saturday, the tamaraw’s skull (cervical vertebrae), limbs (femur and fibula and the radius and ulna), and tail (caudal vertebrae) were transported to Quezon City for the tedious process of animal stuffing and preservation.

TCP Coordinator Neil Anthony del Mundo said the provincial government commissioned a private taxidermist for the procedure, which could take eight to 10 months and cost P300,000.

“It’s not for us but for the next generations that, who knows, might not be able to see a tamaraw anymore,” Gov. Eduardo Gadiano said.

Tamaraw (Bubalus mindorensis) population in the wild is now down to 600, from an estimated 10,000 in 1900, according to the Biodiversity Finance Initiative (Biofin) of the United Nations Development Programme (UNDP).

Most of them are found on Mt. Iglit-Baco and face threats from illegal poachers.

Recently, Biofin led a crowdfunding initiative and raised over P1.1 million from partner institutions and individuals to support tamaraw rangers and forest wardens, who lost their jobs during the coronavirus pandemic. The fund would be turned over on Oct. 29 to cap off Tamaraw Month.

Even in death, Kalibasib was more than an icon of wildlife conservation as he would also be providing researchers the baseline data on the tamaraw’s internal organs.

“We never had any data on the internal organs. I usually referred only to its closest relative like the carabao,” Reyes said.

He said they also wanted to find out how Kalibasib acquired liver cirrhosis, as shown in the necropsy results.

It was not clear why no earlier studies had been made when tamaraws, among them Kalibasib’s mother, “Mimi,” were brought to the gene pool farm for captive-breeding. Mimi died in August 2011 and its skeleton was mounted at the TCP office.

Del Mundo said he was looking forward to see Kalibasib in its new form once a local tamaraw museum in Mindoro was put in place.

Kalibasib’s bones would also be exhumed at the TCP compound’s burial site after a year and would be mounted alongside his mother’s, he said.