(Editor’s note: This is the 7th in a series of reports in observance of INQUIRER.net’s 23rd anniversary. It tells how it started and how it grew to become one of Inquirer Group’s big success stories)

The observance of INQUIRER.net’s 23rd anniversary today could not have come at an inauspicious time. COVID-19 struck at the start of the year, hurting businesses (including the media industry) and people everywhere. With no clear indication of when the contagion will finally end, the future seems more uncertain than ever before. Experts say it will take more than sheer will and determination to overcome the challenges.

Paolo R. Prieto, chair and president of Inquirer Interactive Inc. which publishes INQUIRER.net,  said in his anniversary message that the pandemic challenged the online company to be more creative and resourceful. Affected by the pandemic initially, INQUIRER.net acted decisively and adopted measures to cope with these challenges. By the end of the third quarter, all indications point to a positive spin by yearend. Much of the credit, Prieto added, goes to readers and advertisers who continued to believe in the credibility and reliability of INQUIRER.net’s content. 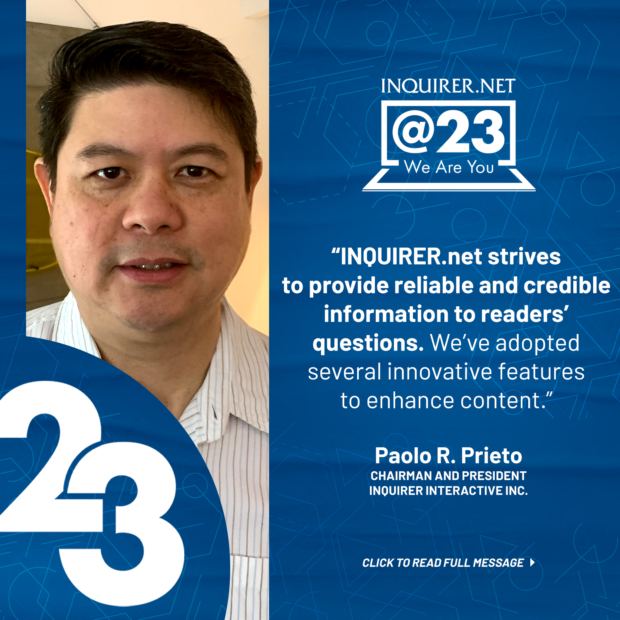 The company’s resilience during trying times can be attributed to its humble beginnings and experiences over the years. INQUIRER.net was formally launched in October 1997, without much fanfare. Not that its staff and management craved for it, but they thought it wise to just simply activate it with only a news story to inform readers that the website is on.

Two basic reasons convinced the board of directors of Philippine Daily Inquirer (PDI) to finally publish online at that time. In her anniversary message, PDI CEO and president Sandy Prieto-Romualdez said she felt then that the decision to publish on the internet was a big “leap of faith”. 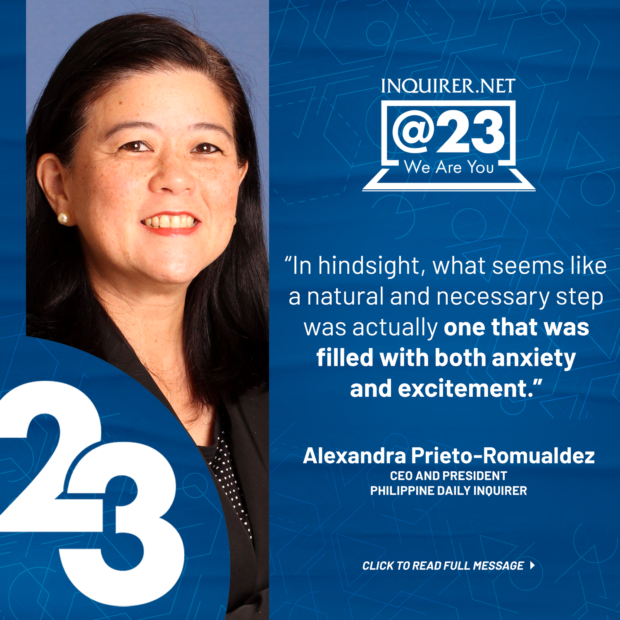 The first reason was the need for the company producing the leading English newspaper in the country to gain a foothold in the so-called information superhighway as a way to the future. This concept of a superhighway stemmed from the development of the worldwide web on the internet.

The second was the realization (a practical one) that an online edition would provide Filipinos based abroad a platform to read the latest news from home without waiting for a hard copy of the newspaper (which arrives days or sometimes a week late depending on the destination).

The original design was actually an electronic version of the newspaper that had the contents of the day’s edition posted online. It became an instant hit to Filipinos in the United States and in other countries thirsty for news back home. The opinion columns also drew a lot of traffic and engagement then, resulting in the site’s popularity and influence.

More than news and opinion, however, the biggest factor in INQUIRER.net’s instant success was, and still is, the Inquirer brand. PDI’s storytelling style and content that have made an impact on the public and on the government had provided its online counterpart a free ticket to local and global recognition.

Other factors chipped in to help in INQUIRER.net’s growth and development. One of these was its partnership with GMA-7 in 2001. Though short-lived, the joint venture that gave birth to inq7.net left valuable lessons on how to further boost the site’s content. The timing was crucial as inquirer.net had been spun off into a separate company under the Inquirer Group. It was time for Inquirer.net to move forward on its own and do things fast and right if it were to compete more effectively with other local media firms entering the online arena.

INQUIRER.net decided to focus on breaking news to capture more readers. Reporters filed stories in real time or at least within the shortest time possible after a news event happens. The strategy worked, generating increased traffic and engagements. Breaking news remains a vital cog in editorial operations, often pitting the site against television and radio networks that do breaking news in-between their programs.

Management also embarked on a drive to improve the site’s contents’ presence on search engines to increase readers’ awareness of the site and what it offers. This is a continuing endeavor.

Advances in technology brought changes in the media landscape over the years. Social media slowly but surely crept into the operations of online companies, ushering in an era of transformation and redirection for existing ones and for upstarts.

Realizing its potential, INQUIRER.net cast its lot on social media, enabling it to reach audiences that comprise new age groups, new ideas, new revenue streams. In a big way, the move is part of the dream to make the site more relevant and receptive to the needs of the times and of new readers.

Facebook particularly has given INQUIRER.net a wider sphere of influence with a following of 6.3 million as of Oct. 19 this year. Its Instagram account also continues to grow, while its tweets are avidly monitored and followed by netizens. Meanwhile, the homepage and landing pages of most of its channels now feature news, photos, graphics, videos and sometimes livestreams of big news events.

Today, the site remains to be No. 4 in the Alexa ranking of top news sites, with page views and video views reaching over 700 million as of September this year. The number of site users also continues to grow despite the COVID-19 pandemic, posting a 52-percent increase from 2018 to August this year.

INQUIRER.net has also decided to expand operations to cover more news scenes. Two years ago, it took over the reins of Cebu Daily News (CDN) when it shifted from print to digital. In many ways, it is part of dotnet’s thrust to tap and develop regional markets and audiences.

Dennis Singson, one of the editors who oversee operations at CDN Digital, says what the digital paper dishes out is hyperlocal news which relates more easily with Cebuano netizens here and abroad. It is very active, too, on social media, with more than two million followers since it has gone digital.

In July this year, the site activated Bandera Online to boost the site’s entertainment menu. The channel is fast gaining mileage in both its news stories (written in Tagalog) and social media posts.

INQUIRER.net now coordinates closely with the video teams of Trans Radio Broadcasting Corp., popularly known as Radyo Inquirer, to provide more news videos on the site. Despite the restrictions set by the government due to the pandemic, video teams continue to go out to cover news events and give readers footage of stories and events unfolding outside their homes.

To expand its multimedia content, INQUIRER.net now hosts a channel, called Esports Inquirer, that contains news and information on this growing industry. It is maintained and updated by a team composed of former competitors, organizers and die-hard supporters of video games.

Starting in August 2019, the team built its coverage of esports from the ground up with local tournaments and conventions. Its biggest feat so far is the coverage of esports at the 2019 Southeast Asian Games held in Manila last December. The inclusion of household titles such as Dota 2, Tekken 7, and Mobile Legends: Bang Bang in the medals event puts esports in the limelight.

The list of challenges and accomplishments, of ups and downs will grow longer for INQUIRER.net, but there’s a basic ingredient that binds it together. This year’s theme “[email protected]: We are you” underscores the company’s vision and mission of reaching as many Filipinos as possible wherever they are and whenever they’re available. It also intends to continue gaining the trust and support of business partners in the years ahead. 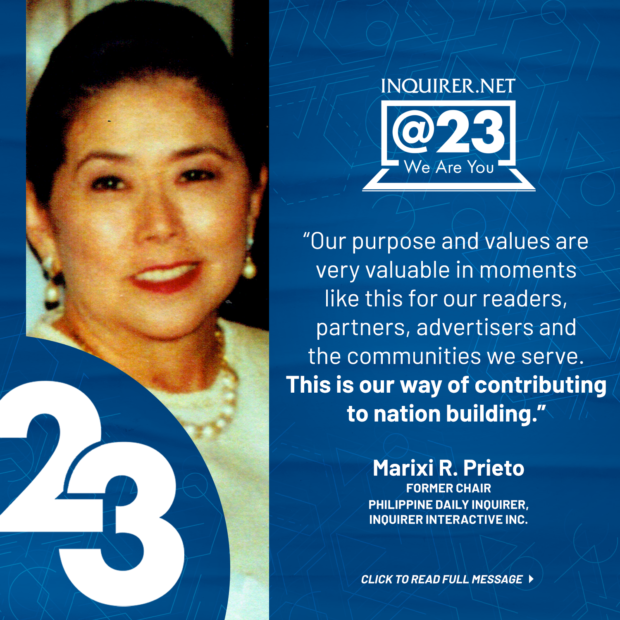 Ms Marixi R. Prieto, former chair of PDI and Inquirer Interactive Inc., put it best in her anniversary message: “Inherent to our mission…our purpose and values are very valuable in moments like this for our readers, partners, advertisers and the communities we serve. This is our way of contributing to nation building.”