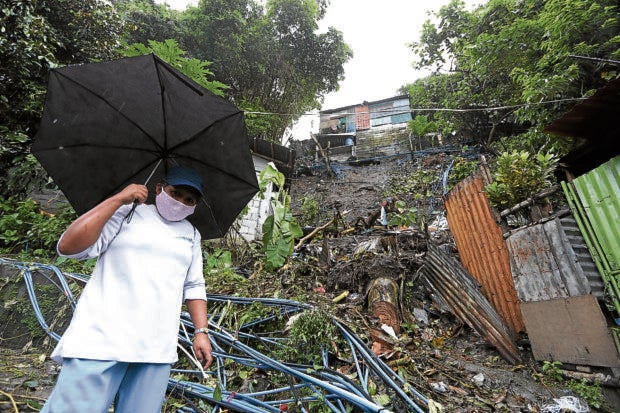 A portion of houses in Sampaguita Extension in Barangay Payatas, Quezon City on October 20, 2020, which has been declared by city officials as prone to erosion and no longer safe for the residents especially when there is continuous rains.
INQUIRER PHOTO / NINO JESUS ORBETA

Floods were also reported in nine villages in Lopez town, Quezon province, as well as portions of Calauag and Tagkawayan towns on Tuesday.

Pepito (international name: Saudel) was expected to make landfall in Aurora or Isabela province on Tuesday night, moving westward across Luzon with winds of up to 75 kilometers per hour near the center and gusts of up to 90 kph, according to the Philippine Atmospheric, Geophysical and Astronomical Services Administration (Pagasa).

In Isabela, residents in the coastal towns of Palanan and Dinapigue and the eastern towns of Echague, Jones, San Agustin and San Mariano were warned of possible flooding and landslides.

The Talolong River in Lopez, Quezon, overflowed due to the surge of seawater brought in by high tide around 5 a.m. on Tuesday. “But the water subsided around 8 a.m.,” said Jimar Marjalinao of the municipal disaster management office.

In Pampanga, at least 37 villages in the coastal towns of Masantol and Macabebe were already flooded even before Pepito hit a big portion of Luzon. The provincial disaster risk reduction and management council said high tide and monsoon rain caused the flooding.

Evacuation centers were being readied by local governments in Pangasinan, Pampanga and Quezon provinces.

Water was released from Binga Dam in Benguet province at 3 p.m. on Tuesday due to continuous rain. The stock at the dam was 574.32 meters above sea level (masl), nearing its 575-masl maximum operating mark.

The Laguna Lake Development Authority (LLDA) said it was monitoring the lake water, warning that a critical level could trigger shoreland flooding.

As of Tuesday, the lake water level was 11.80 meters, 0.45 meter higher than the baseline, said Emil Hernandez of the environmental regulations department, adding that it was still within the normal range.

Once the water rises to its critical level of 12.50 meters, flooding is expected in the lakeshore areas in Laguna, Rizal and Metro Manila.

On Tuesday, Pepito continued to move west-northwest at 30 kph and was expected to exit over the West Philippine Sea on Wednesday, where it could further strengthen into a severe tropical storm on the following day.

Pagasa warned that the storm was forecast to pass over the upper Pampanga River Basin area, bringing light to moderate, with at times heavy, rainfall until Wednesday.

Residents should expect a “slow to gradual rise” of the Upper Pampanga River, including its major tributaries, such as Coronel, Digmala, Penaranda, Talavera and Rio Chico.

“Rivers and tributaries within the Pasac-Guagua Sub-Basin are also likely to rise slowly but to remain below bankfull capacity,” the weather bureau said.