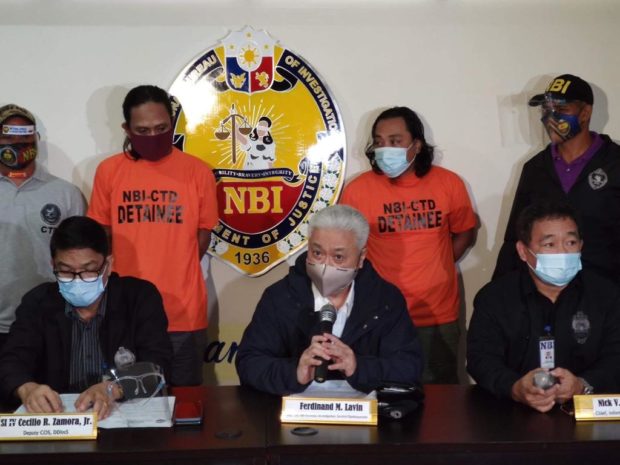 The NBI presented to the media the arrested suspected Abu Sayyaf members. Photo from NBI

MANILA, Philippines – The National Bureau of Investigation has arrested in Pasay City two suspected members of the Abu Sayyaf Group wanted for the 2002 kidnapping and killing of members of Jehova’s Witness.

The two were arrested by members of the NBI’s Counter-Terrorism Division (NBI-CTD) by virtue of arrest warrants issued by the Pasig City Regional Trial Court Branch 266.

NBI-CTD Officer-In-Charge Darcy Binaya said the two were among those charged with six counts of non-bailable charges of kidnapping and serious illegal detention with ransom before Pasig City RTC Branch 266.

Following a series of surveillance operations based on intelligence they received, Binaya said joint elements of the NBI-CTD and the Armed Forces of the Philippines (AFP) arrested Ibi in Pasay City on Oct. 12 and Jamil on Oct. 19.

“These two arrested subjects acted as perimeter guards during the duration of the kidnapping,” Binaya noted.

Both Ibi and Jamil are currently detained at the NBI Detention Facility. [ac]