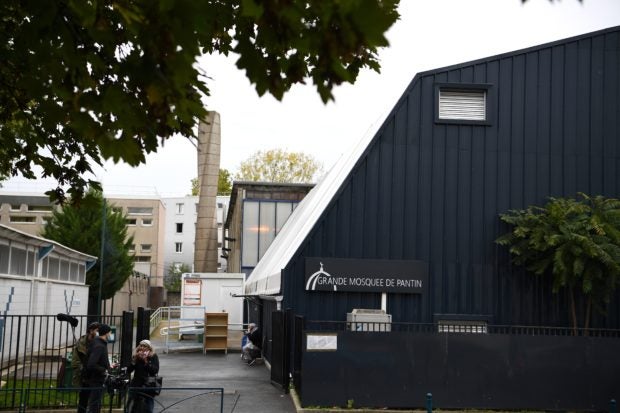 A view of the Grand Mosque de Pantin, which will close following a request by the prefect, in the northeastern suburbs of Paris on October 20, 2020. – French authorities said on October 20, 2020, they would close thew Grand Mosque de Pantin as part of a clampdown on radical Islam that has yielded over a dozen arrests following the beheading of a teacher who had shown his pupils a cartoon of the Prophet Mohammed. The mosque in a densely-populated suburb northeast of Paris had disseminated a video on its Facebook page days before the gruesome murder on October 16, 2020, railing against teacher Samuel Paty’s choice of material for a class discussion on freedom of expression, said a source close to the investigation. (Photo by Christophe ARCHAMBAULT / AFP)

Paris, France — French authorities said Tuesday they would close a Paris mosque as part of a clampdown on radical Islam that has yielded over a dozen arrests following the beheading of a teacher who had shown his pupils a cartoon of the Prophet Mohammed.

The mosque in a densely-populated suburb northeast of Paris had disseminated a video on its Facebook page days before Friday’s gruesome murder, railing against teacher Samuel Paty’s choice of material for a class discussion on freedom of expression, said a source close to the investigation.

The interior ministry said the mosque in Pantin, which has some 1,500 worshippers, would be shut on Wednesday night for six months.

Interior Minister Gerald Darmanin, who vowed Monday there would be “not a minute’s respite for enemies of the Republic,” had asked regional authorities to carry out the mosque closure.

And on Monday, police launched a series of raids targeting Islamist networks.

Paty, 47, was attacked on his way home from the junior high school where he taught in Conflans-Sainte-Honorine, 40 kilometers (25 miles) northwest of Paris.

A photo of the teacher and a message confessing to his murder was found on the mobile phone of his killer, 18-year-old Chechen Abdullakh Anzorov, who also posted images of the decapitated body on Twitter.

The murder was preceded by a fierce online campaign against Paty and the school, led by the father of a schoolgirl who accused the teacher of disseminating “pornography” for showing a cartoon of the prophet naked.

The school said Paty had given Muslim pupils the choice to leave the classroom, but the lesson nevertheless caused an uproar.

The father who posted the video shared by the Pantin mosque is among 15 people arrested after the killing, along with a known Islamist radical and four members of Anzorov’s family.

Darmanin accused the father and the radical of having issued a “fatwa” against the teacher.

On Tuesday, the head of the Pantin mosque, M’hammed Henniche, said he had shared the video not to “validate” the complaint about the cartoon, but out of concern for Muslim children being singled out in class.

Four pupils suspected of accepting payment for pointing Paty out to his killer were also in custody Monday.

Tens of thousands of people took part in rallies countrywide on Sunday to honor Paty and defend freedom of expression.

‘Carried out by thugs’

Darmanin vowed the government would also tighten its grip on charities with suspected links to Islamist networks.

The killing has drawn parallels with the 2015 massacre at French satirical magazine Charlie Hebdo, where 12 people, including cartoonists, were gunned down for publishing cartoons of Mohammed.

French teachers have long complained of tensions around religion and identity spilling over into the classroom.

Emotions ran high outside Paty’s school on Monday, where Muslim leaders gathered to offer condolences and distance their religion from the atrocity.

“It is very important to come here to show our sorrow, to show that what happened here is not Islam. It was done by thugs who have nothing to do with Islam,” said Kemadou Gassama, a Paris imam.

The political temperature is also rising, with French President Emmanuel Macron promising that “fear is about to change sides” in a new anti-Islamist campaign.

Far-right National Rally leader Marine Le Pen — likely to face Macron in a 2022 presidential election — has called for “wartime legislation” and an immediate moratorium on immigration.

Paty’s beheading was the second knife attack since a trial started last month over the Charlie Hebdo killings.

In the September attack, two people were wounded outside the publication’s former offices.

A silent rally is being planned for Tuesday evening in homage to Paty, and Macron will attend a ceremony organized with the teacher’s family on Wednesday.

Meanwhile, Paris prosecutors said they had opened an investigation into a French neo-Nazi website hosted abroad that republished the photo of Paty’s decapitated corpse posted to Twitter by the killer.