Pagasa said in its 5 p.m. severe weather bulletin that Pepito now packs maximum sustained winds of 75 kilometers per hour (kph) near the center and gustiness of up to 90 kph. It was last seen 110 kilometers east of Baler, Aurora, as it accelerated at 30 kph towards the west-northwestward direction.

The state weather bureau said Pepito is likely to hit the coast of Aurora anytime between 6:00 p.m. and 10:00 p.m. Tuesday. 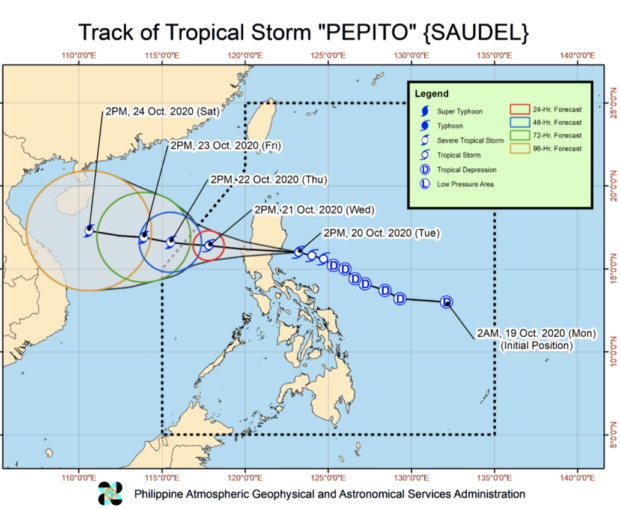 As of the latest weather update, the following areas are under Tropical Cyclone Wind Signal No. 2, which means that wind speeds of 60 kph to 120 kph may be felt in the next 36 hours:

The following areas, on the other hand, are under Tropical Cyclone Wind Signal No. 1:

Pepito is expected to cross the Luzon landmass overnight, and move to the West Philippine Sea by Wednesday afternoon, at a distance of 275 kilometers west of Dagupan, Pangasinan.  By Thursday, before it makes its way out of the Philippine area of responsibility, the tropical storm is forecast to have amassed more strength and may fall under the category of a Severe Tropical Storm.

Moderate to heavy rains will prevail over Central Luzon, Mimaropa, Camarines Norte, Quezon, Nueva Vizcaya, Quirino, Isabela, mainland Cagayan, La Union, Pangasinan, and Benguet from Tuesday night to Wednesday morning because of Pepito, according to Pagasa, while Metro Manila and the rest of Luzon, Western Visayas, Zamboanga Peninsula, and Bangsamoro will have light to moderate with at times heavy rains.

Pagasa has advised residents in areas with Tropical Cyclone Wind Signal warnings – especially those living in low lying areas and near mountain slopes – to monitor weather updates and coordinate with local governments as flash floods and rain-induced landslides may possibly occur.

A gale warning likewise has remained hoisted over the seaboards of Batanes, Cagayan, and Ilocos Norte and the western seaboards of Batangas and Occidental Mindoro (including Lubang Island) due to rough to very rough seas caused by Pepito.  This means sea travel is risky over these areas, especially for those using small seacrafts.