Trump, Biden to have microphones muted for part of final presidential debate 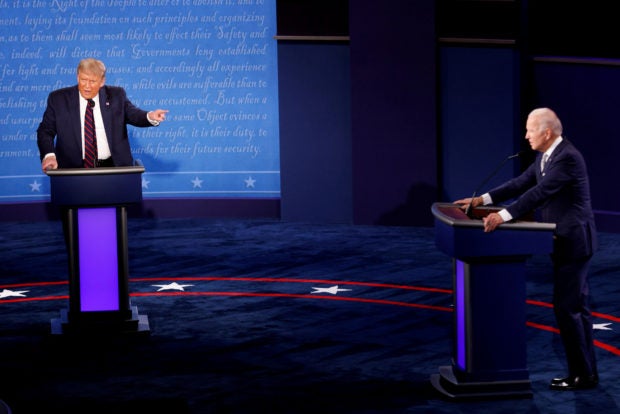 President Donald Trump and Democratic nominee Joe Biden will have their microphones muted for parts of their final debate on Thursday to allow each U.S. presidential candidate a block of uninterrupted time to speak, according to the group sponsoring the debate.

The Commission on Presidential Debates, the sponsor of the televised debate in Nashville, said changes were necessary after the combative first debate between the candidates on Sept. 29.

“We realize, after discussions with both campaigns, that neither campaign may be totally satisfied with the measures announced today,” the commission said in a statement. “We are comfortable that these actions strike the right balance and that they are in the interest of the American people, for whom these debates are held.”

The debate organizers will give each candidate two minutes of uninterrupted time at the beginning of each segment of the debate, which will be 15 minutes each.

“The only candidate whose microphone will be open during these two-minute periods is the candidate who has the floor under the rules,” the commission said.

Read Next
Ireland imposes some of Europe’s toughest COVID-19 curbs
EDITORS' PICK
Experience clearer calls nationwide with Smart VoLTE
UP law prof Ryan Oliva missing; family cries for help
After weeks of delay, formal transition of power to Biden begins
Public warned against use of fake CopperMask
‘I believe I can win’: Hidilyn Diaz all eyes on Olympic gold
Working from home can be smooth and manageable if you master these tips
MOST READ
UP law prof Ryan Oliva missing; family cries for help
Zia Dantes ‘kilig’ after receiving birthday greetings from idol Sarah G, YouTube stars
Viral dog caught lying inside Taguig mall joins establishment’s security team
Is Duterte willing to work with Robredo? Maybe it’s time for VP to take initiative – Palace
Don't miss out on the latest news and information.