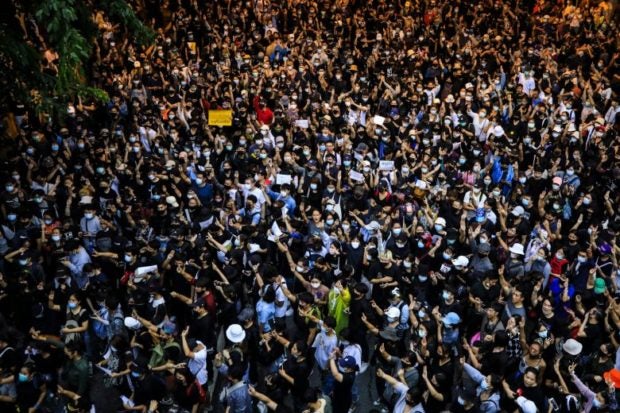 Pro-democracy protesters gather during an anti-government protest in Bangkok, on Oct 17, 2020. EPA-EFE via The Straits Times/Asia News Network

BANGKOK — Thousands of anti-government protesters in Bangkok massed in defiance on Saturday (Oct 17) after a police crackdown a day earlier, alleging the government had used excessive violence and demanding Prime Minister Prayut Chan-o-cha step down.

Unlike on Friday, when riot police blasted protesters with water cannons before advancing into crowds with shields and batons, the security presence on Saturday was light. The flash mobs ended peacefully after a few hours.

This was the fourth consecutive day of mass protests despite Mr Prayut’s declaration of a “serious emergency” in Bangkok on Thursday, which banned political gatherings of five or more people and gave security officers extensive powers to search and detain individuals.

The decree was made in response to a protest in inner Bangkok on Wednesday which appeared to slow a motorcade bearing Queen Suthida and Prince Dipangkorn Rasmijoti. Two protesters on the scene have been charged with endangering the Queen, an offence which carries a potential life sentence.

“The government conducted the operation to end the protest within legal conventions,” Mr Anucha said on Saturday. “It did not harm the rights and freedoms of any group of people.”

The events on Friday did not create winners or losers, but only loss to the country, he said.

“The Prime Minister asked the people to join hands in avoiding the protests and any unlawful violence.”

Anti-government protesters dispersed by police amid the chaos on Friday surged back onto the streets on Saturday, this time prepared with umbrellas and motorcycle helmets.

“We didn’t have any weapons, only umbrellas. How could they do this to us?” said a 23-year-old undergraduate who wanted to be known as Por. She was among thousands who occupied the busy Lat Phrao intersection for some four hours on Saturday.

“I am a little scared, but I feel I cannot surrender. The more of us are arrested, the more we need to come out. We cannot abandon our friends.”

According to the Thai Lawyers for Human Rights, at least 72 people have been arrested in protest-related cases since Tuesday.

Police shut down Bangkok’s entire electric rail network on Saturday afternoon in a bid to prevent protesters from congregating. In response, the people walked or piled into tuk-tuks to head to sites which were announced via social media less than a hour before the protests began. Many of them were high school students who took turns condemning the government via loudspeakers as their peers sat on the tarmac.

The trio have been vocal in advocating monarchy reform, a deeply taboo topic in Thailand where insulting the king or queen can land an offender in prison for up to 15 years. Their fiery speeches have opened the lid on public discussion about the role of Thailand’s monarchy.

Protesters have questioned his expenditure amid the economic hardship caused by the pandemic, and are calling for his powers to be trimmed in line with Thailand’s status as a constitutional monarchy. Protesters also want amendments to the military-backed Constitution which they argue favours Mr Prayut, who took power after staging a military coup in 2014.

Mr Matthew Wheeler, a senior analyst with the International Crisis Group, wrote in a note released on Friday that the need for “a fresh concord on the monarchy’s changing role” was “daunting”.

“Government officials and royalists insist that public discussion of this role is off limits, but their position is, in light of recent events, anachronistic. The degree of repression necessary to effectively reinstate the prohibition, including online, would tarnish both the government and the monarchy.”