France to rally in solidarity, defiance after beheading of teacher | Inquirer News

France to rally in solidarity, defiance after beheading of teacher 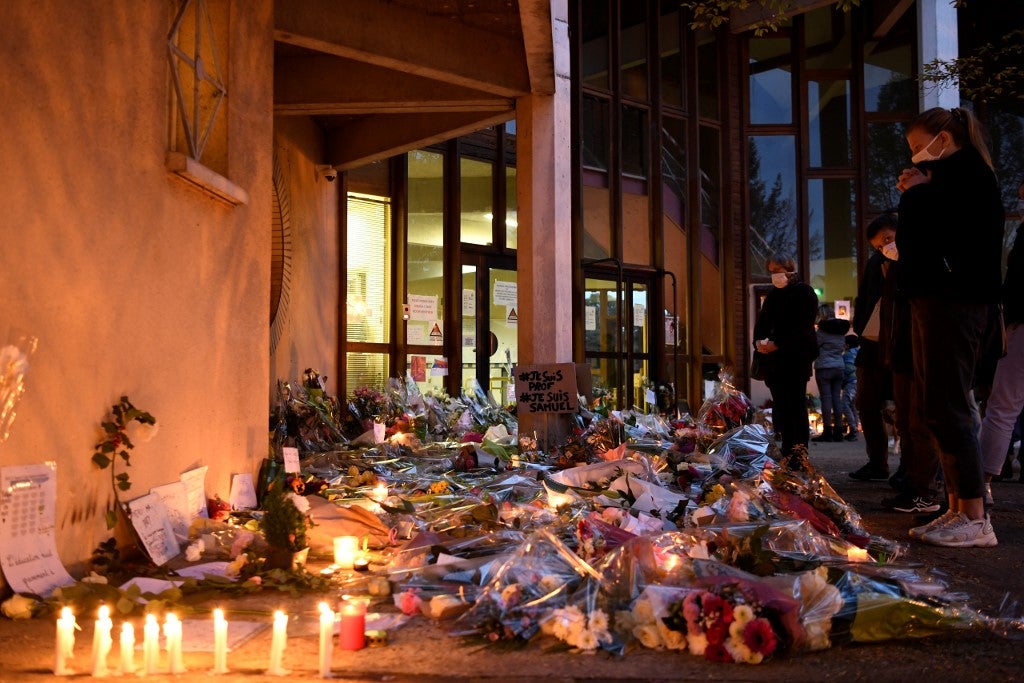 People stand in front of flowers and candles next to a placard reading ‘I am a teacher, I am Samuel’ at the entrance of a middle school in Conflans-Sainte-Honorine, 30kms northwest of Paris, on October 17, 2020, after a teacher was decapitated by an attacker who has been shot dead by policemen. (Photo by Bertrand GUAY / AFP)

CONFLANS-SAINTE-HONORINE, France — Rallies in dozens of cities across France were expected Sunday in a show of solidarity and defiance following the decapitation of a teacher outside his school for showing pupils cartoons of the Prophet Mohammed.

The beheading of history teacher Samuel Paty in a Paris suburb Friday has sparked outrage in France and memories of a wave of Islamist violence in 2015 sparked by caricatures of the Prophet Mohammed published by the satirical magazine Charlie Hebdo.

“It is absolutely important to show our mobilization and our solidarity, our national cohesion,” education minister Jean-Michel Blanquer told France 2, calling on “everyone (to) support the teachers”.

One rally was set to take place at the Place de la Republique in Paris, a traditional site of protest where around 1.5 million people demonstrated in 2015 following a deadly attack on Charle Hebdo’s office by Islamist gunmen.

Paty had been the target of online threats for showing the cartoons, with the father of one schoolgirl launching an online call for “mobilisation” against him, France’s anti-terror prosecutor Jean-Francois Ricard said.

The 18-year old suspect, named as Abdullakh A, was shot dead by police shortly after the attack.

The Russian embassy in Paris on Saturday said the suspect’s family had arrived in France from Chechnya when he was six and requested asylum.

The schoolgirl’s father and a known Islamist militant are among 10 people arrested.

Ricard said the school received threats after the class in early October, which featured the controversial caricatures — one of the prophet naked — with the girl’s father accusing Paty of disseminating “pornography”.

The aggrieved father named Paty and gave the school’s address in a social media post just days before the beheading which President Emmanuel Macron has labelled an Islamist terror attack.

Ricard did not say if the attacker had any links to the school, pupils or parents, or had acted independently in response to the online campaign.

Witnesses said he was spotted at the school on Friday afternoon asking pupils where he could find Paty.

A photograph of Paty and a message confessing to his murder were found on the assailant’s mobile phone.

The prosecutor said the attacker had been armed with a knife, an airgun and five canisters. He had fired shots at police and tried to stab them as they closed in on him.

He was in turn shot nine times, said Ricard.

Locals in the Normandy town of Evreux where the attacker lived in the Madeleine district described him as low key.

One who had been to school with him said he had become noticeably religious in recent years.

“Before, he got involved in fights but for the last two or three years he had calmed down” and had been “immersed in religion”, he said.

Friday’s attack was the second such incident since a trial started last month into the January 2015 massacre at the offices of the Charlie Hebdo satirical magazine, which had published caricatures of the prophet that unleashed a wave of anger across the Islamic world.

The magazine republished the cartoons in the run-up to the trial, and last month a young Pakistani man wounded two people with a meat cleaver outside Charlie Hebdo’s former Paris offices.

The attacker himself was not known to the French intelligence services, said the prosecutor.

An investigation is under way into “murder linked to a terrorist organisation”.

The investigation will also look at a tweet from an account opened by the attacker, and since shut down, that showed a picture of Paty’s head and described Macron as “the leader of the infidels”.

Macron’s office said a national tribute would be held for Paty on Wednesday.

On Saturday, hundreds of pupils, teachers and parents flooded to Paty’s school to lay white roses.

Some carried placards stating: “I am a teacher” and “I am Samuel” — echoing the “I am Charlie” cry that travelled around the world after the 2015 Charlie Hebdo killings.

Martial, a 16-year-old pupil, said Paty had loved his job: “He really wanted to teach us things.”

According to parents and teachers, Paty gave Muslim children the option to leave the classroom before he showed the cartoons, saying he did not want their feelings hurt.

Virginie, 15, said Paty showed the cartoons every year as part of a discussion about freedom following the Charlie Hebdo attack.