Last night out in France as 20 million face virus curfew 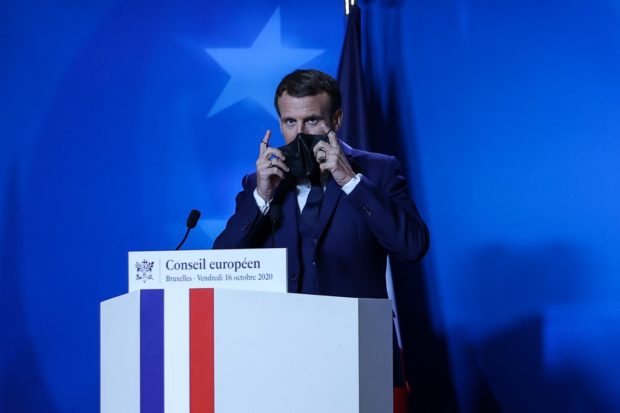 France’s President Emmanuel Macron, removes his face mask prior to giving a press conference at the end of the two days face-to-face European Union (EU) summit at the European Council Building in Brussels, on October 16, 2020. (Photo by Kenzo Tribouillard / POOL / AFP)

PARIS — Millions of French people were looking forward to a last night of freedom on Friday before a COVID-19 curfew in Paris and other large cities comes into force for a least a month, prompted by an alarming surge in new cases.

It was ordered by President Emmanuel Macron this week as the number of new infections and deaths raised the specter of hospital overloads like those seen in March and April.

Health authorities reported Thursday a record 30,621 new cases in the previous 24 hours as well as 88 deaths and over 200 new COVID admissions to intensive care units.

While the curfew has broad public support — a Harris Interactive poll after Macron’s announcement found 70 percent approval — officials in several cities worried about the heavy social and economic costs of a measure set to last four weeks, or possibly six if the health situation fails to improve.

The new nighttime restrictions come into force at midnight on Friday (2200 GMT) in the capital and eight other major regional cities.

Paris Mayor Anne Hidalgo is pressing the government to ease the rules for theatres, cinemas, and other cultural venues so that patrons can return home later.

“The force of a rule lies in its simplicity,” Le Maire said. “If we start allowing multiple exceptions,” he told French TV, “we’re not going to make it”.

Prime Minister Jean Castex added Friday: “The rules must apply to everyone”.

Restaurant owners have complained bitterly about a measure they say makes little sense given the strict social distancing rules they have already applied.

“I’ve never seen anything like this in the 50 years I’ve been here,” said Stain Roman, manager of La Mere Buonavista restaurant in Marseille, another city facing the curfew.

She would now close down entirely at night, as have hundreds of other restaurants across France. “What else can we do? Our employees have to be home by 9 pm,” she said.

Marseille’s mayor Michele Rubirola — herself a doctor — said the measure resulted from the government’s insufficient efforts to bolster hospital systems over the last few months.

She said residents were paying the price “through the loss of their daily pleasures, their freedom, or through economic hardship”. 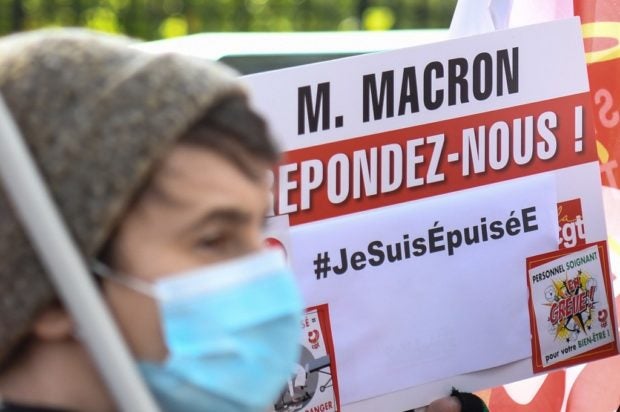 A member of the nursing profession holds a sign that reads, ‘Answer us’ during a rally by nursing staff following a call by the trade unions and hospital groups at Place Vauban, in the French capital Paris on October 15, 2020. (Photo by Alain JOCARD / AFP)

Prime Minister Jean Castex confirmed Thursday that the curfew requires nearly all businesses to shut their doors on time, except for essential services, with “everybody home from 9 to 6.”

People will need a signed attestation or an electronic version downloaded to a phone for activities allowed during the curfew, such as walking their dog, or risk a fine of 135 euros ($160) just like during the two-month lockdown earlier this year.

Repeat offenders could face fines of up to 3,750 euros.

The curfew measure, which comes just ahead of a two-week school holiday, contains no travel restrictions, raising the prospect that huge numbers of families will flee cities for the country.

That prompted officials in Le Touquet, a popular resort town on the English Channel, to impose its own curfew, with bars and restaurants ordered to close at 11:30 pm.

Nationwide, wedding celebrations and other parties in public venues as well as student parties have been outlawed, and people are being urged to limit gatherings in private homes to six people.

“We have to act. We need to put a brake on the spread of the virus,” Macron said Wednesday when he also put the entire country back under a health state of emergency starting Saturday.

The move notably requires all restaurants to ask clients for contact details so that authorities can find them if a coronavirus infection is reported.

By the end of the month, airports will also be able to carry out rapid-result Covid antigen tests for passengers, transport minister Jean-Baptiste Djebbari told CNews television.