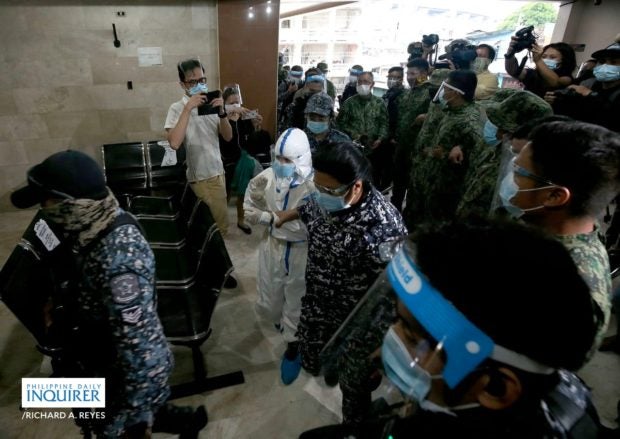 Detained activist and urban poor advocate Reina Mae Nasino visits the wake of her 3-month-old daughter River at La Funeraria Rey in Pandacan, Manila, on Wednesday, October 14, 2020. The Manila Regional Trial Court granted Nasino a furlough to attend the wake and burial of her child.   (RICHARD A. REYES / INQUIRER)

“The BJMP [Bureau of Jail Management and Penology] jail officers assigned to escort Nasino were insulted, harassed and verbally abused by leftist groups aligned with Ms. Nasino. Truth be told, it was the leftist groups who caused the tension during the wake when they suddenly vented their ire on the BJMP officers who were just doing their jobs,” Malaya said in a statement.

Malaya also accused the leftist groups of “hogging the headlines” during the wake.

“What was supposed to be a solemn occasion for a mother to peacefully grieve the death of her daughter was intentionally turned into a media spectacle at the clear instigation of these leftist groups,” he said.

“We commiserate and condole with Ms. Nasino and respect her right to grieve the death of her daughter. However, we condemn in the strongest terms the acts of these leftist groups that placed the security of Ms. Nasino and the lives of our jail officers at risk,” Malaya added.

The National Union of People’s Lawyers (NUPL) previously disclosed that it will file cases against personnel of the BJMP over the tension that erupted while Nasino was at the wake.

Nasino’s child was laid to rest at the Manila North Cemetery Friday afternoon.