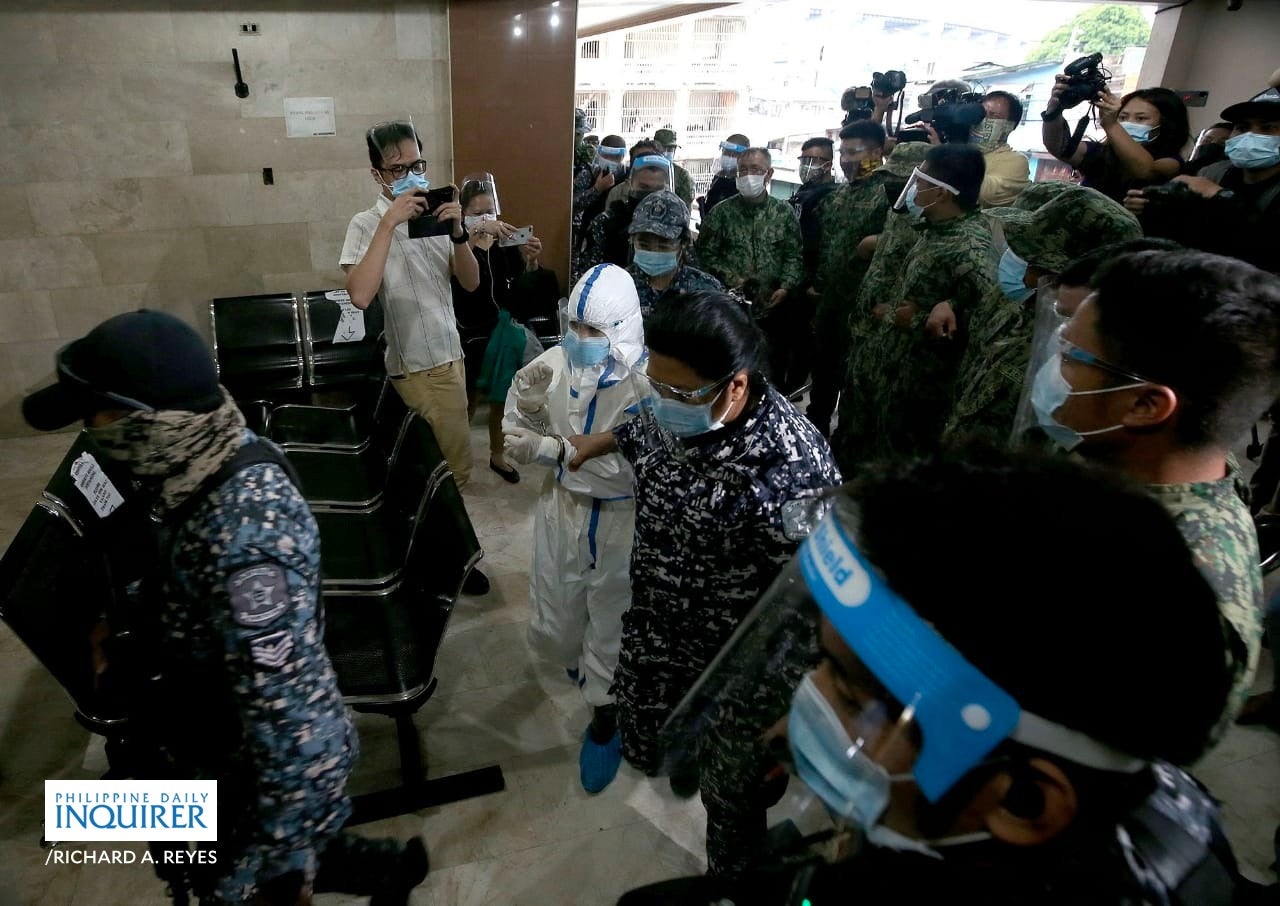 Detained activist and urban poor advocate Reina Mae Nasino visits the wake of her 3-month-old daughter River at La Funeraria Rey in Pandacan, Manila, on Wednesday, October 14, 2020. The Manila Regional Trial Court granted Nasino a furlough to see her baby for the last time, however, reducing her original request of three straight days to only two days October 14 and 16, from 1 p.m. to 4 p.m. each day. RICHARD A. REYES / INQUIRER

MANILA, Philippines — The National Union of People’s Lawyers (NUPL) is looking at filing complaints against personnel of the Bureau of Jail Management and Penology (BJMP) who were involved in the tension that erupted during the wake of activist Reina Mae Nasino’s three-month-old daughter on Wednesday.

“We will seriously study filing contempt and administrative charges against the warden and the escorts on yesterday’s incident at Baby River’s wake,” NUPL president Atty. Edre Olalia said in a text message read during a press conference hosted on Thursday by Kapatid, a support group for families and friends of political prisoners.

Olalia also confirmed this in a text message to INQUIRER.net.

“Yes, we will seriously study that legal option. But given the whirlwind of events and issues at hand, we will choose our battles and fight them at the right time. We seek emotional moratorium meanwhile until the dust of cruelty and barbarity has settled,” he said.

Tension gripped during Nasino’s visit to the wake of her daughter River on Wednesday when her guards blocked her from being interviewed by members of the media.

Before this, the Manila Regional Trial Court also shortened the furlough it gave Nasino to visit her daughter’s wake from three straight days to only three hours for two days: from 1 p.m. to 4 p.m. on October 14 and 16.

The court issued the order after being informed by the Manila City Jail that it has limited personnel to escort Nasino during the furlough.

However, the NUPL, in a statement, said the BJMP lied when it said before Judge Paulino Gallegos of Manila RTC Branch 47 that they lacked the personnel who can guard Nasino overnight.

“About 47 jail and police officers escorted Ina from the Manila City Jail to the La Funeraria Rey in Pandacan, Manila, where the remains of her three-month-old baby lay in a small coffin. The police, armed with high powered firearms, surrounded the funeral home, while seven jail officers closely guarded Ina inside,” it said.

“But worse than the deception and overkill, was the escorts’ cruel and inhumane treatment of the grieving mother,” NUPL added.

According to NUPL, Nasino’s guards “came looking like they were poised for battle,” even as they knew that Nasino, who was then in personal protective equipment and handcuffs at the wake, was not a high-security risk.

“It is clear that Ina’s escorts came to scoff at her grief by destroying the solemnity of the funeral with tension, fear, and intimidation. They arrested her on fake charges and caused the early separation of her baby in jail. What is another act of cruelty and injustice?” the group added.

Nasino, 23, and two other activists were arrested at the Tondo, Manila office of the Bagong Alyansang Makabayan in November 2019 and were charged with illegal possession of firearms and explosives, a non-bailable offense.