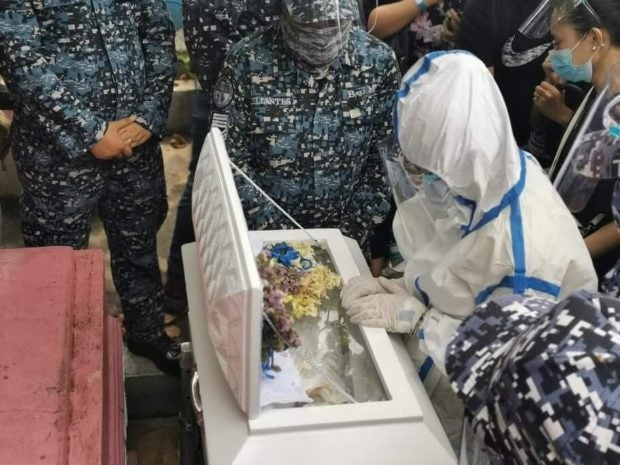 MANILA, Philippines — Baby River, daughter of political detainee Reina Mae Nasino, was buried at the Manila North Cemetery on Friday afternoon a day after a court-sanctioned furlough to visit her daughter’s funeral was marred with tension.

It has been a week since three-month-old River died at the Philippine General Hospital in Manila due to acute respiratory distress syndrome.

River was born at the Fabella Hospital on July 1 and was separated from her mom on Aug. 13. The baby stayed with her aunt while Nasino remained at the Manila City Jail with pending cases at court.

River was then rushed to the hospital after being diagnosed with acute gastroenteritis. This led human rights lawyers and groups to call for the temporary release of detainee Nasino.

Kapatid, a group of families and friends of political prisoners in the country, earlier urged those who would join the burial to wear black, and tie black ribbons at their houses as well as vehicles.

(Let us join in grieving for Baby River. Wear black and tie black ribbons at your houses, backyards and vehicles.)

During the funeral, a heated argument occurred after Nasino’s prison guards allegedly prevented the activist from answering questions from the media. The escorts allegedly tried to return her to detention earlier than the time set by the Manila RTC.

Originally, Nasino was given three days to visit her daughter but was shortened after the  Manila City Jail raised concern that it only has few personnel to guard Nasino at her daughter’s wake.

The National Union of People’s Lawyers (NUPL) said they will file complaints against the members of the Bureau of Jail Management and Penology (BJMP) involved in the altercation during the funeral of Baby River.

Nasino, an activist, was arrested in a 2019 raid by the Manila Police District at the Bayan-Manila office. At the time, she was one-month pregnant.

Nasino is facing cases of illegal possession of firearms and explosives, but claimed the charges were just trumped up, noting that police “planted evidence” during the raid.