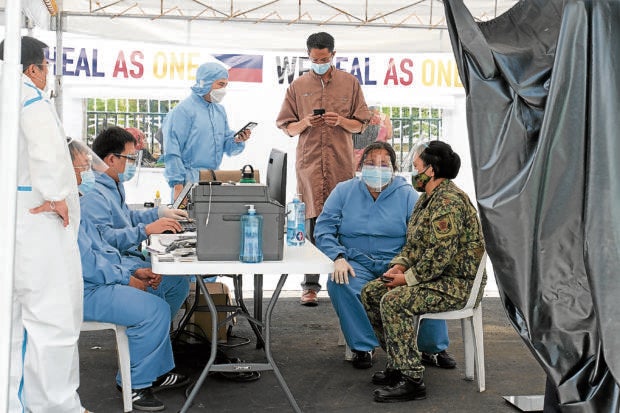 BAGUIO CITY, Benguet, Philippines — While concerns about the safety of bringing the candidates for the Miss Universe Philippines here are growing, the organizers said pageant activities will push through in the city and nearby La Trinidad town in Benguet province.

About 50 candidates of this year’s pageant are arriving here on Thursday and will stay until Oct. 25 for the coronation night to be held at the Baguio Country Club.

The pageant night will be telecast exclusively by GMA Network.

The candidates and over 100 pageant staff and officials have met the city requirements for crossing its borders. These include clearance from the National Task Force (NTF) against COVID-19 and negative results of the reverse transcription-polymerase chain reaction (RT-PCR) test taken on Oct. 12 before their trip.

According to Mayor Benjamin Magalong, the group will undergo a second test on Oct. 17 and an exit test before leaving Baguio. The city government also wanted their movement restricted so all pageant activities would be confined at the Baguio Country Club except for photo shoots at the strawberry farm in La Trinidad, Magalong said.

The city government was expecting to receive all RT-PCR results on Wednesday night and would bar anyone who would test positive for the virus. The rapid antigen tests, which are being pilot tested here under the supervision of the Department of Health (DOH), are still allowed by the city government, particularly for workers who frequently travel to Baguio from their residences outside the city.

But Restituto Padilla, the NTF spokesperson, on Wednesday said the government was already looking for alternatives to faster and cheaper antigen tests after these failed to achieve 85 percent of the standard results required by the DOH when compared to the more sensitive RT-PCR tests.

“Unfortunately it didn’t pass the study so we are looking for other testing protocols,” Padilla said at a press briefing in Manila. He was referring to initial results of the Baguio study which compared the accuracy of antigen tests with that of RT-PCR tests. The antigen tests detected 10 percent of those infected in a study group, which was below the 15 percent confirmed by RT-PCR tests. Second study group

Laboratory results of 8 percent of the 869 residents who were tested have yet to be included in the study. A recommendation from the DOH health technology assessment committee said the antigen test will not provide the best results in mass testing and is “most useful when patients are manifesting symptoms.”

Dr. Rowena Galpo, city health officer, said her office was finalizing these results and was still undertaking a separate test on a second study group composed of tourists and travelers.

“But we have not yet released a final report on the study,” she said. The study was commissioned by the DOH before the release of regulations on when, where and how antigens are to be used during the pandemic, she said. It was not clear whether the candidates for the Miss Universe Philippines pageant would be included in the study.

Baguio has opened its doors to residents of provinces in the Ilocos region under the “Ridge and Reef” travel program starting this month to revive the tourism industry. Magalong said tourism protocols for the travel corridor were being reviewed.

“We started looking at the data of the last 13 days … and we may consider easing some stringent restrictions. We are learning and others are learning from us,” he said.

He cited issues on strict regulations enforced by Baguio, including the rule that tourists must sign up for a menu of travel tours. Only four visitors had been allowed to enter Baguio out of more than 200 applicants since the city launched the travel program on Sept. 22.

The city officially opened its borders to tourists on Oct. 1.

Read Next
Bridge work stopped after beam collapse
EDITORS' PICK
Percy Lapid’s kin: ‘We demand that his cowardly assassins be brought to justice’
Nothing’s certain so here’s how everyday Filipinos can make the most out of their Plan B
Do all the things you do, faster
PNP vows to bring justice for slain Percy Lapid; says probe underway
House energy committee chair Arroyo bats for cheap electricity
‘Seniority’ requirement despite vacant posts in DOH bothers senators
MOST READ
Student stabs teacher dead in Samar town
Not rehired?: Trixie Cruz-Angeles not on list of reappointed Cabinet execs
Final net satisfaction rating slightly decreases for Robredo, Sotto — SWS
Heart Evangelista to stay abroad ‘indefinitely’: ‘Hindi muna ako babalik’
Don't miss out on the latest news and information.