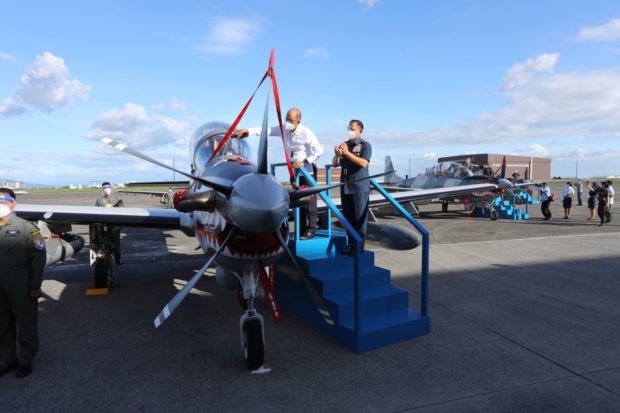 Philippine Air Force formally commissions six brand new Super Tucano close air support aircraft on Oct 13, 2020 at a turnover ceremony in Clark Air Base, Pampanga. These will be the first brand new planes of the PAF’s 15th Strike Wing after many years. DND-PAS

Six new Brazilian-built Super Tucano aircraft had been formally turned over to the PAF on Tuesday (Oct. 13) at Clark Air Base in Pampanga.

In his speech during the commissioning ceremony, Lorenzana said he had been discussing with the PAF chief about the Tucanos. “Having six Super Tucanos is good, but maybe another six will be better,” Lorenzana said.

“We hope that we will have other businesses with you in the future,” he said, thanking officials from Embraer SA, the manufacturer of the Tucanos, who were present at the ceremony.

The six planes, which cost P4.7 billion, will serve as close air support aircraft under the PAF’s 15th Strike Wing. They were to replace the ageing North American Rockwell OV-10 Bronco and Aermacchi SF-260TP armed trainers.

Lorenzana described the acquisition of Super Tucanos as “another milestone” in the armed forces.

“It has been a dream of the Philippine Air Force to acquire combat support aircraft like this one for a long time. Today is a fulfillment of that dream,” he said.