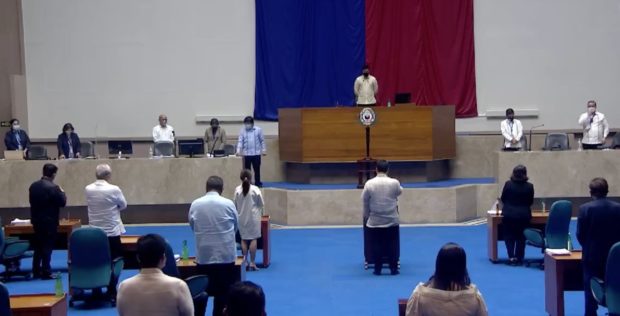 MANILA, Philippines — With a new Speaker and the leadership row presumably resolved, the House of Representatives resumed Tuesday its plenary deliberations on the proposed 2021 national budget.

Several lawmakers attended the deliberations following the appeal of President Rodrigo Duterte to Congress to hold a special session from October 13 to 16 to avoid delays in passing the national budget for next year.

One of the possible options is to recall the second reading approval of House Bill No. 7727 or the 2021 General Appropriations Bill (GAB), which contains the proposed budget for next year and revert to the period of debates.

This means that lawmakers will once again be given a chance to scrutinize the budget and ask questions to sponsors of the proposed funding of different government agencies. This also essentially opens the period of amendments where lawmakers can propose changes and adjustments to the GAB.

Lawmakers would then have to re-approve the proposed budget on second reading before proceeding with the final approval of the measure.

“We will go back to second reading and we will finish the second and third reading on Friday,” Yap explained to INQUIRER.net in a phone interview.

Approving the measure on second and third reading on the same day is possible since President Rodrigo Duterte has already certified as urgent the proposed 2021 budget.

Yap explained that this is another possible scenario since deliberations have also taken place at the committee level, where lawmakers were also allowed to ask questions to various government offices regarding their proposed budget.

Once the measure has been approved on final reading, it will then be transmitted to the Senate where it will once again be deliberated—this time, by the senators.

To recall, on October 6, resigned Speaker Alan Peter Cayetano moved to terminate the period of debates and amendments to the proposed funding and instead proposed the creation of a smaller committee “with full powers to entertain committee as well as individual amendments by the members.”

With the period of debates and amendments closed, the proposed 2021 budget was approved on second reading on the same day.

Some speculate this was a ploy to delay the speakership turnover to now-Speaker Lord Allan Velasco, which was expected to take place on October 14.

However, on October 12, 186 lawmakers voted to elect Velasco in a session held at the Celebrity Sports Club in Quezon City.

While Cayetano’s camp questioned this, Velasco’s election was ratified hours before the budget deliberations.