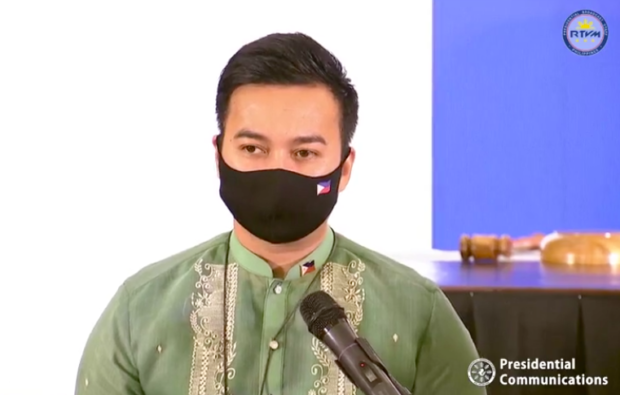 MANILA, Philippines — Amid the looming speakership showdown at the plenary, the supporters of newly-installed Speaker Lord Allan Velasco gathered once again Tuesday, a day after holding a session and election that incumbent Speaker Alan Peter Cayetano has called a sham, to tackle the resumption of budget deliberations.

A number of lawmakers are gathered at the Celebrity Sports Club in Quezon City for a “breakfast meeting,” which includes discussions on the budget deliberations that will take place in Batasan Pambansa later this afternoon.

(…of course to discuss what to do so later on we can continue the budget of the President, that there will be a smooth and peaceful transition… because we can see yesterday that Speaker Alan Cayetano remains defiant.)

The gathering happened just a day after 186 lawmakers “elected” Velasco as the new Speaker of the House in a session conducted at the Celebrity Sports Club.

It is, however, unclear whether the election is deemed legal especially with Cayetano’s camp still insisting the proceedings conducted were illegal and the incumbent Speaker himself dubbing it as “fake.”

But Martinez said the “new majority” in the House will heed to the call of President Rodrigo Duterte to now shift focus to the deliberations of the proposed national budget for 2021 which will resume on Tuesday afternoon.

“I just would like to make it very clear that our group, the call of the President is we talk about the budget today peacefully and ano kami, cooperative sa budget and all those political chops and other political intramurals that happened in the last days and last weeks ay tapos na, tabi na ‘yan [it’s done, set it aside],” the lawmaker added.

Martinez said present in the meeting is “the new majority of Speaker Lord.”

Also present in the meeting was ACT-CIS Partylist Rep. Eric Yap who serves as chairperson of the House committee on appropriations.

(I went to the Celebrity [Sport Club] earlier because I suggested to Speaker Velasco to end this issue in the House. That means there should be voting needed on who would would win, either him [Velasco] or Speaker Cayetano, so our people will no longer feel confused.)

(Because if they will not undergo election now, nothing will happen, I will run the budget alone.)

Presidential spokesperson Harry Roque announced that Duterte called on Congress to a special session on October 13 to 16 “to avoid any further delays on its prompt passage.”

The General Appropriations Bill (GAB), which contains the proposed 2021 budget, was supposed to be approved on final reading in the lower chamber on October 16.

However, on October 6, Cayetano moved for the termination of the period of deliberation on the measure even if several other government agencies’ proposed funding has yet to be scrutinized.

With the period of debates and amendments closed, the lower chamber approved the proposed 2021 budget on second reading and consequently suspended the session until November 16, meaning the proposed funding for next year would not be approved on final reading in the House until that date.

These developments seemed to have irked Duterte who warned members of the House of Representatives to immediately resolve the budget impasse or else he will take matters into his own hands.