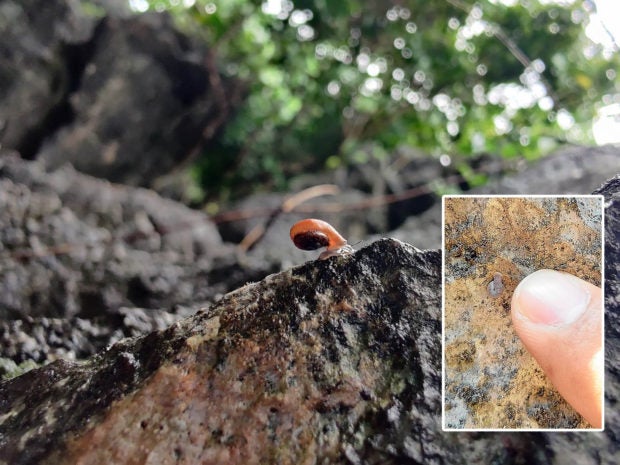 HUGE’ FIND Roughly the size of a worker ant, the Hypselostoma latispira masungiensis subspecies of microsnail has been found among limestone boulders at Masungi Georeserve in Baras, Rizal province. Inset shows the size of the microsnail in relation to the tip of a human finger. — PHOTO COURTESY OF MASUNGI GEORESERVE

Hidden in plain sight and away from untrained eyes, a new subspecies of microsnail has been discovered living its quiet life among huge limestone boulders at Masungi Georeserve in Baras, Rizal province.

The Hypselostoma latispira masungiensis is only roughly the size of a worker ant and its shell measures less than 5 millimeters, yet the discovery of this miniscule creature lends a colossal voice to the campaign to protect the country’s karst ecosystems that serve as its habitat.

The identification of the Masungi snail was the result of a three-year study by Filipino scientists from the University of the Philippines, namely Harold Lipae, Angelique Estabillo, Ian Kendrich Fontanilla and Emmanuel Ryan de Chavez.

In their paper published in the Philippine Journal of Systematic Biology, the masungiensis is described as a subspecies of the Hypselostoma latispira that was discovered in 1984 in Baguio City, more than 200 kilometers away.

While the Baguio snails are relatively smaller in shell size and have a narrower body whorl (shell structure) and apertural width, their genetic similarity with the Masungi snails was discovered to be at 99.98 percent.

According to De Chavez, the Hypselostoma are dependent on karsts, or areas that are made up of limestone, since these are rich sources of calcium that are used for their shells and eggs.

One of the few malacologists (scientists who study mollusks) in the country whose studies focus on land snails, De Chavez first studied these terrestrial animals at the Pamitinan Protected Landscape in neighboring Rodriguez (formerly Montalban) town, where limestone boulders and caves were also abound.

Recognizing that the limestones in Masungi were even more intact than Pamitinan, he sought the approval of the Masungi Georeserve Foundation in 2017 to study and research snails in the area. “They even wondered why I wanted to look for snails,” he said in an interview with the Inquirer.

His hunch to search for snails in the georeserve was immediately proven right.

On the first day of their initial reconnaissance, he and his students found the Masungi snail quietly existing among craggy boulders in an area called “600 Steps.” At 614 meters above sea level, it was the highest spot in all of Masungi, where the temperature drops to a chill and moss and lichens are abundant—an ideal living spot for the snails.

“At that time, we couldn’t identify it yet, but it looked different since its ventral side was exposed,” said De Chavez, who also serves as curator for mollusks at the UP Los Baños Museum of Natural History. “But when we saw them, they were so many, and so we got really excited.”

From Baguio to Baras

The Masungi snails were also very particular about their microhabitat: even a slight change in the elevation and they would be found nowhere.

Their study continued over the next three years, where they would conduct DNA analysis on the Masungi snail and even go to Baguio to find the original Hypselostoma.

But how did the microsnail hailing from the summer capital make its way to Baras, more than 200 km away?

One of their hypotheses, said De Chavez, is that the microsnails could have used the karst forests along eastern Luzon as “stepping stones” from Baguio to Baras.

“We also consider wind dispersal, meaning they could have been carried by strong winds during the storms,” he said. “They could also be carried by their predators since they could withstand the digestion process.”

Another theory is that these microsnails may actually be extensive across the country, but many remain unstudied because of the very few Filipino scientists who focus on land snails, De Chavez said.

While they may not be as charismatic or popular as other species, snails play a crucial role in our ecosystem, functioning as recyclers of nutrients in the soil and as an important food item for certain animals, including birds.

“Among land snails, microsnails that are dependent on limestones are the most common ones to be extinct,” De Chavez said. “Because they’re not easily seen, people don’t think they exist.”

Habitat destruction stands as the biggest threat to microsnails, so studying and conserving karst ecosystems like Masungi is a significant step toward ensuring their survival.

“The discovery of the new microsnail further raises the urgency of protecting Masungi and other karst ecosystems against destruction,” said Ann Dumaliang, managing trustee of the Masungi Georeserve Foundation.

“Since the snail is a range-restricted and karst-dependent species, if the limestones and the areas around it are quarried, this species and others can easily go extinct,” she added.

De Chavez also noted that in Masungi alone, his team had recorded 45 different species of snails, including the masungiensis, a much bigger number compared to those recorded in Mount Makiling and Mount Banahaw.

“We need to protect these snails because they are also part of our natural heritage,” he said. “If they go extinct, a little part of our being Filipino goes away with it.” INQ