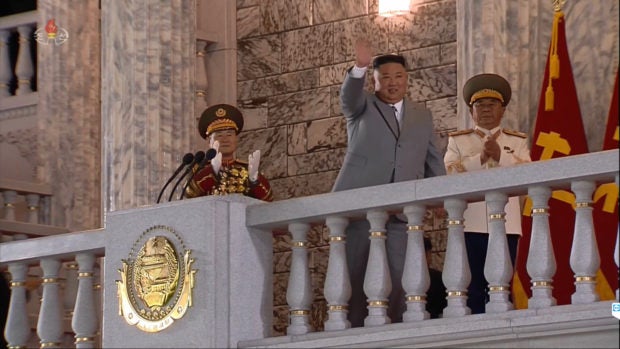 North Korean leader Kim Jong-un waves to soldiers at a military parade in Pyongyang on Saturday. (KCNA-Yonhap via The Korea Herald/Asia News Network)

Kim also wished South Korea a fast recovery from the coronavirus pandemic in a reconciliatory message to Seoul, expressing hope that the day will soon come for the two Koreas to “join hands” after the current health crisis is over.

He made the speech at midnight on Friday before the military parade started at Kim Il-sung Square in the center of Pyongyang to celebrate the 75th founding anniversary of the ruling Workers’ Party, according to state TV footage.

“We will continue to strengthen the war deterrent, the righteous self-defence means, so as to contain and control all the dangerous attempts and intimidatory acts by the hostile forces, including their sustained and aggravating nuclear threat,” Kim said while wearing a light-gray suit.

War deterrent is usually considered to refer to nuclear weapons.

Kim stressed that war deterrent is purely for self-defense, and “will never be abused or used as a means for preemptive strike.”

“But, if, and if, any forces infringe upon the security of our state and attempt to have recourse to military force against us, I will enlist all our most powerful offensive strengths in advance to punish them,” he added.

Kim, however, made no mention of the United States during the address.

After the address, a series of strategic weapons, including a new ICBM, were paraded. Other weapons unveiled included a submarine-launched ballistic missile and North Korea’s version of Russia’s Iskander short-range ballistic missile.

The newly-disclosed ICBM was carried on a transporter erector launcher (TEL) with 22 wheels, indicating that it is longer than the Hwasong-15. A longer missile is believed to be capable of flying further, according to officials and experts.

But the new ICBM does not appear to carry multiple warheads, which the North has been working to develop, given that its front part is relatively sharp, according to the experts. In order to contain multiple warheads, it needs to be more round.

“More analysis is needed to learn the exact features of the newly disclosed ICBM. It could be called either the upgraded version of the Hwasong-15, or the Hwasong-16,” a Joint Chiefs of Staff (JCS) officer said.

During the address, Kim choked up at times as he repeatedly apologized to his people for their suffering from multiple challenges, including recent typhoons and flooding and the impact from its anti-pandemic campaign.

Following his speech, the North’s best-trained goose-stepping soldiers marched through the square followed by tanks, military vehicles and other weapons. Fighter jets were seen flying in formation, drawing “75” in the sky.

In a stand overlooking the square, Kim was also seen saluting marching soldiers and waving with a broad smile.

The parade is believed to have taken place earlier in the day and the broadcast appeared to be recorded footage. Earlier in the day, South Korea’s Joint Chiefs of Staff said that the North appeared to have staged a massive parade at dawn involving large amounts of equipment and personnel.

It is the first military parade that the North has held since 2018.

North Korea has been expected to roll out “new strategic weapons,” including a new ICBM or a submarine-launched ballistic missile (SLBM), that Kim pledged to show off in his New Year’s Day message amid stalled denuclearization talks with the United States.

North Korea is believed to have three types of ICBMs — the Hwasong-13, Hwasong-14 and Hwasong-15, and it has sought to develop a multiple-warhead ICBM that can fly further and is harder to intercept.

The Hwasong-15, which is the most advanced version so far, has an estimated range of 12,874 kilometers and is capable of striking any part of the continental US The type was last test-launched on Nov. 29, 2017.

“We are analyzing details of the weaponry that Pyongyang displayed today,” a JCS officer said. “No unusual movements by the North Korean military have been detected.”

The North tends to mark every fifth and 10th anniversary with larger-scale events, such as military provocations, including missile launches and parades of troops, newly developed strategic weapons and other military hardware.

It is quite unusual for the North to stage a military parade before dawn. Past parades have all been held during daytime hours.

“Instead of the blaze of publicity, North Korea also seems to be trying to manage the situation ahead of the US elections,” professor Kim Young-jun of the Korea National Defense University said.

“The unexpected predawn event also seems to aim to make it harder for the outside world to learn details of its military assets,” he added.

Despite little progress in negotiations with Washington, leader Kim appeared to have maintained good relations with US President Donald Trump. One day after the US first couple were diagnosed with the new coronavirus, Kim sent a letter to Trump and offered his “sympathy.”

The COVID-19 situation could also have affected the decision as a nighttime event might have helped it mobilize a fewer number of people so as to minimize antivirus steps.

The communist country has called for all-out efforts against the new coronavirus, though it has claimed the country does not have a single virus case.

In August, leader Kim presided over a key party meeting and instructed officials to prepare “at the best level all the celebrations with peculiar style as a great political festival to be provided as an excellent gift to the 75th birth anniversary of the WPK,” according to state media.

“North Korea might have tried to make the event look like a kind of festival, rather than a show of force, in consideration of relations with the US,” the professor added. (Yonhap)