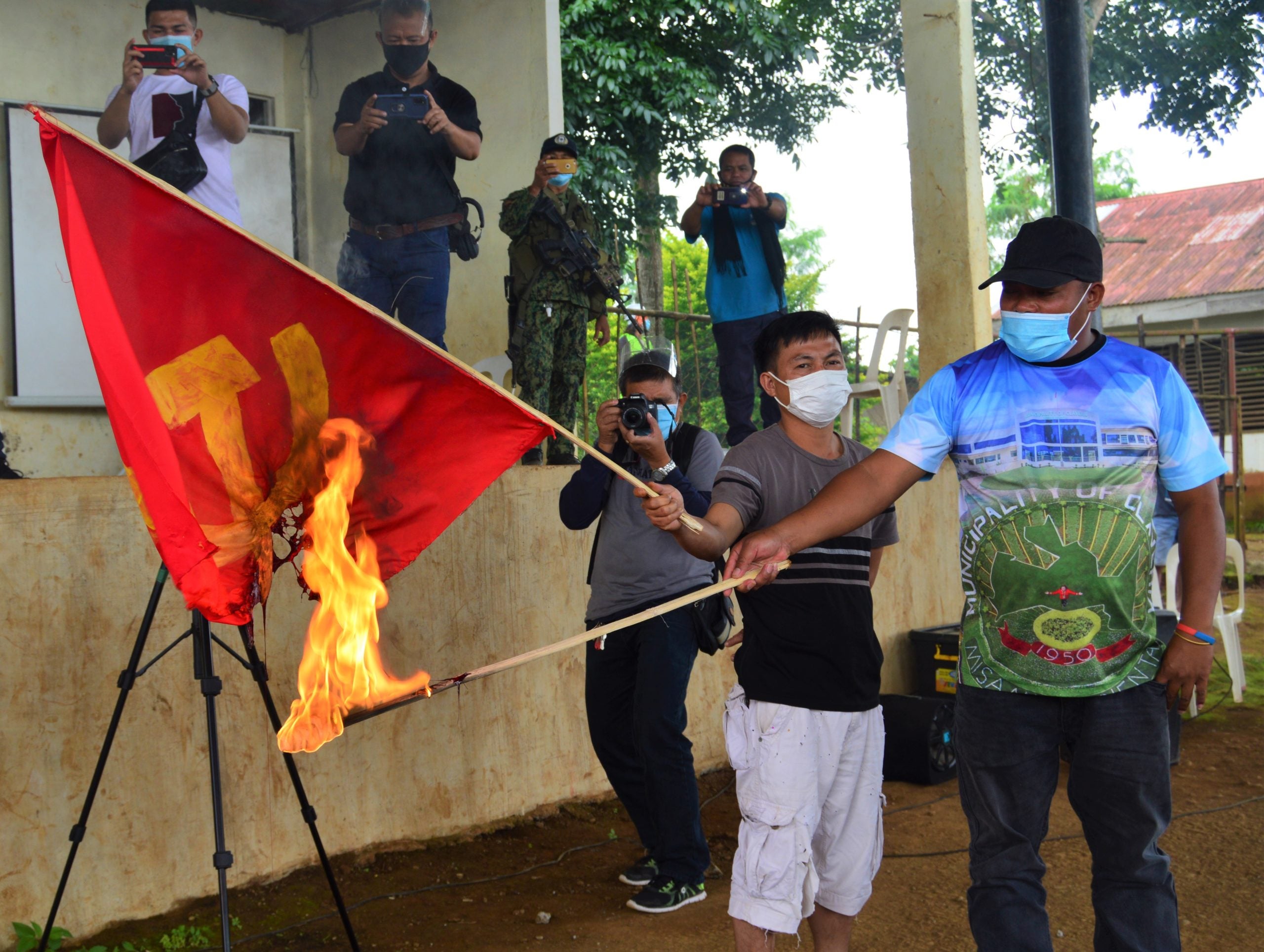 INDIGNATION. A resident of Claveria, Misamis Oriental burns a flag of the New People’s Army during a rally that condemned rebel atrocities in the town. (Jigger J. Jerusalem)

In a video shared by the Philippine Army’s 4th Infantry Division (4ID), a motorcade was held around town and culminated in a rally against the communist movement.

Bucales represented the Lumad in the Lianga municipal council as indigenous people’s mandatory representative. He also headed a paramilitary that was blamed for abuses against teachers of a nongovernment school for the Lumad in Surigao del Sur.

Bucales, along with two companions, was ambushed by NPA guerrillas last Oct. 4. It was the third attempt on his life after he turned his back on the communist movement and became sympathetic to the military.

On Friday, the National Commission on Indigenous Peoples (NCIP) condemned the killing of Bucales, acknowledging his role in the government’s campaign against the NPA in Surigao del Sur.

“We call on our IP leaders and communities to stay united and strong in the face of this communist ideology that continues to sow hatred and violence among us,” the NCIP said in a statement.

In Claveria town of Misamis Oriental, Mayor Meraluna Abrogar urged local residents to stand up to the atrocities of the NPA.

“We must not cower and we must not allow them to terrorize us,” Abrogar told a crowd of 300 protesters who joined an indignation rally on Friday.

The rebels burned a hauler truck and a bus used to transport workers of the Del Monte Philippines, Inc. (DMPI) on Oct. 6.

Abrogar said the NPA atrocities, if not challenged, threatens to derail the town’s tourism push, as well as the nascent jobs generated by DMPI’s operation since 2016.

‘Punch in the gut’

Abrogar also urged the DMPI not to rush into a pullout from the town, citing the close to a hundred families who directly depended on its pineapple plantation for livelihood.

Presidential peace adviser Carlito Galvez said the attack on DMPI “comes like a punch in the gut, especially now that the nation is reeling with the challenges resulting from COVID-19.”

“Peace can only be achieved by rejecting violence in this time of the COVID-19 pandemic,” Galvez added.

Lt. Col. Ricky Canatoy, commanding officer of the Army’s 58th Infantry Battalion, said the burning of the vehicles was to project that the NPA is still strong amid the many setbacks it has experienced.

In a pursuit operation, the Army has captured three persons allegedly involved in the burning of the DMPI vehicles.