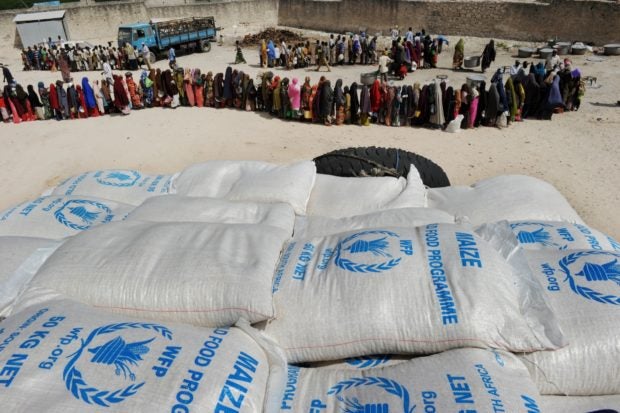 Somali people living in nearby camps for Internally Displaced Persons (IDP’s) queue in Mogadishu to receive cooked meals in the courtyard of a Somali Non-governmental organization who is partner with the World Food Program and who serves about 1,000 people daily with rations of cornmeal and vegetable soup on Aug.15, 2011. Image: AFP/Roberto Schmidt

Here are five facts about the Rome-based organization:

Created in 1962 on the request of United States President Dwight Eisenhower as an experiment to provide food aid through the UN system, WFP had only existed a few months when an earthquake struck northern Iran.

Others soon needed its help: a typhoon made landfall in Thailand; war refugees needed feeding in Algeria.

In 1963 WFP’s first school meals project was born. In 1965, the agency became a fully-fledged UN program.

WFP focuses on emergency assistance as well as rehabilitation and development aid. Two-thirds of its work is in conflict-affected countries, where people are three times more likely to be undernourished than elsewhere.

It works closely with the other two Rome-based UN agencies: the Food and Agriculture Organization (FAO), which helps countries draw up policy and change legislation to support sustainable agriculture, and the International Fund for Agricultural Development (IFAD), which finances projects in poor rural areas.

WFP is funded entirely by voluntary donations, most of which comes from governments. It raised $8 billion in 2019, which it says was used to provide 4.2 million metric tons of food and $2.1 billion of cash and vouchers.

It has more than 17,000 staff, with 90 percent based in the countries where the agency provides assistance.

Where in the world?

There are few places where the WFP has not provided assistance. In western Sahel in the 1970s, ravaged by drought, it used “everything in its power — from car to camel, from road to river — to assist those in need”.

It delivered 2 million tons of food during Ethiopia’s 1984 famine. It was present in Sudan, Rwanda, and in Kosovo, then later in Asia after the 2004 tsunami, and Haiti’s 2010 earthquake.

In the Democratic Republic of the Congo (DRC), which is suffering the second largest hunger crisis in the world, it assisted 6.9 million people in 2019, as well as helping fight a deadly Ebola virus outbreak.

But WFP’s largest emergency response has been in Yemen, where it tries to feed 13 million people each month.

Over 821 million people in the world are chronically hungry, while another 135 million are facing severe hunger or starvation, and an additional 130 million could join them by the end of 2020 due to coronavirus, the agency warns.

The number of severely food insecure people in the world had already risen nearly 70 percent over the past four years, and the economic fallout from the virus pandemic is expected to spark “a hunger pandemic”, WFP said.

“We urgently need more support from donors, who of course are already hard-pressed by the impact of the pandemic in their own countries”.

WFP’s logistics services used a network of hubs, passenger and cargo airlinks, and medical evacuation services to enabled a steady flow of cargo and workers to the frontlines of the pandemic.

The coronavirus fallout is being felt hardest in Latin America, which has seen an almost three-fold rise in the numbers of people requiring food assistance, as well as West, Central and Southern Africa.

“Before the coronavirus even became an issue, I was saying that 2020 would be facing the worst humanitarian crisis since World War II,” WFP’s executive director David Beasley told the UN security council this year.

“With Covid-19, we are not only facing a global health pandemic but also a global humanitarian catastrophe.” IB