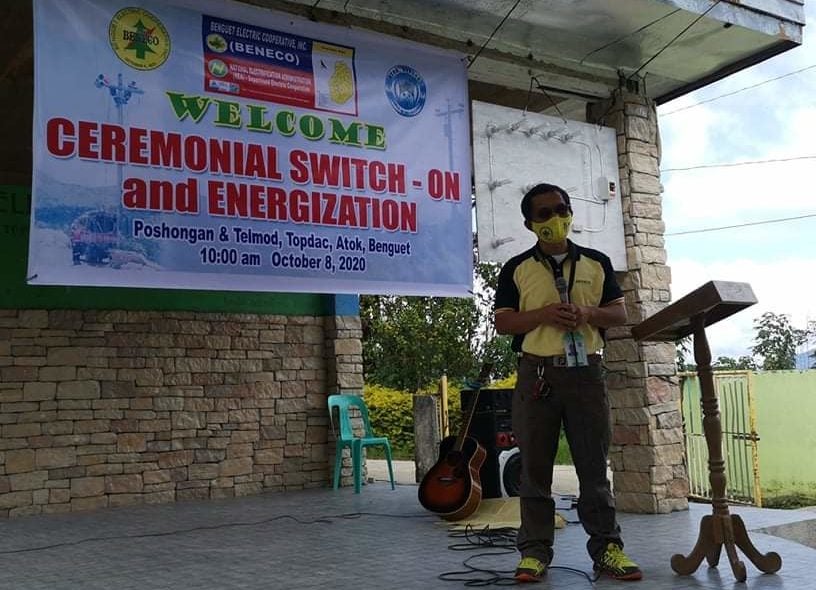 Melchor Licoben, Beneco acting general manager, speaks before residents of two communities at the village of Topdac in Atok, Benguet before the ceremonial switch-on of electric supply in the remote places. PHOTO BY KIMBERLY QUITASOL

ATOK, Benguet—Two communities here got its electric supply for the first time on Thursday (Oct. 8) through a program of a power utility in the province.

The Benguet Electric Cooperative (Beneco) finished installing electric wires and posts in the communities of Poshongan and Telmod, which were part of the village of Topdac, as part of its electrification of remote areas.

Officials of Beneco and the provincial government led a ceremonial switch-on here on Thursday morning to celebrate the achievement.

Mayor Raymundo Sarac said the electrification of the two communities was the result of partnership between the municipal government, Beneco, the provincial government and National Energy Administration.

He said electricity, invented centuries ago, would bring progress to the communities and benefit students who are adjusting to the new normal of blended learning.

The mayor asked residents to be responsible for maintaining the electric facilities.